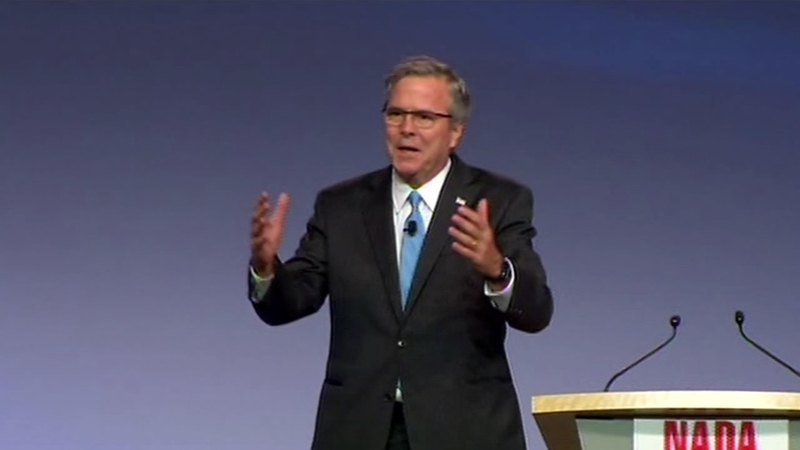 SAN FRANCISCO (KGO) -- Consumers are certainly revved up about buying cars. Sales are through the roof and crowds at an auto dealers conference in San Francisco reflected that. But, having a possible presidential candidate may have also helped.

Auto sales have been rising the past five years, and 2015 could see sales of 16.9 million vehicles. But dealers might have to do incentives to move smaller, gas-efficient models as consumers get a beak at the gas pump and consider buying bigger vehicles.

There are lots of shiny new models on display at the National Automobile Dealers Association show at Moscone Center. Their economist put out the rosy numbers during the show, convinced that more consumers are working again, and they're feeling more confident about spending money to buy a car.

But the choice of car could be different than what they might have chosen at this time last year. With lower pump prices saving an average consumer about $750 this year, SUV's and light trucks are expected to make up 60 percent of sales this year.

A Southern California dealer says he's being careful about expanding his stores and employees, even though the next three years look promising.

"The growth for 2015 makes total sense and probably 2016 and 2017, and then I think there's got to be an adjustment somewhere, and we have to be careful we don't build more stores and put in more dealers to handle a three-year run," said Los Angeles auto dealer Michael Sullivan.

The auto dealers invited former Florida Governor Jeb Bush to be their keynote speaker, and he joked with them that their checkbooks are safe -- a reference to his still-unannounced intentions about running for president next year. He still thinks the economy needs help.

"We're in the fifth year, almost sixth year of a recovery, and 60 percent of Americans believe we're still in a recession. They're not dumb. It's because they are in a recession," said Bush.

Many auto dealers indicated they might be adding employees this year. They are said to be the largest group within the country's retail industry with more than one million employees.