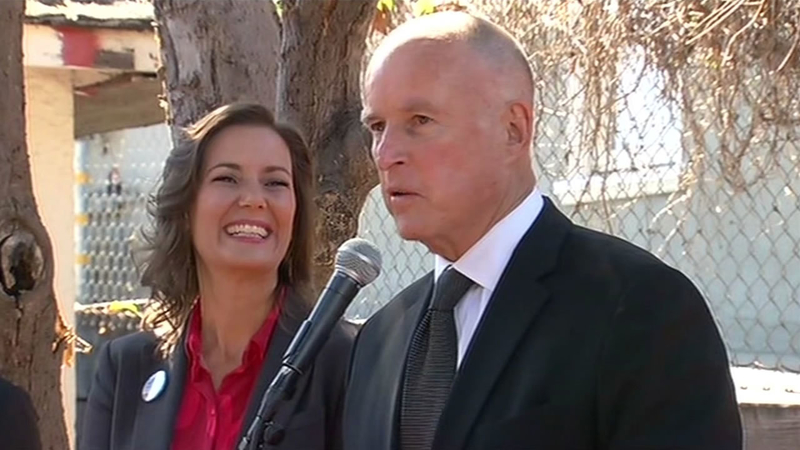 OAKLAND, Calif. (KGO) -- With a crowded mayoral race going on in Oakland, Governor Jerry Brown, a former mayor and current resident of that city put his big name behind one of the top contenders.

Libby Schaaf is running third or fourth, according to the polls. So, an endorsement from the governor couldn't hurt. What the governor would not tell ABC7 News is who he would put as his second and third choice on the Ranked-Choice Voting ballot.

"I can tell you it's difficult for me as I read the voter pamphlets," Brown said.

Brown admits he doesn't totally understand Oakland's Ranked-Choice Voting system, but he's certain about who to endorse in the crowded mayor's race.

"I'm here to endorse Libby Schaaf because she's a down to earth person. She has a lot of common sense. She's done good things on the City Council," Brown said.

"I am so excited to bring back to Oakland government that Jerry Brown, roll up your sleeves, get some stuff done energy for Oakland," Schaaf said.

"My concern is not what the other candidates are doing," Oakland mayoral candidate Rebecca Kaplan said.

The candidate who polls show is leading the race to be Oakland's next mayor, Kaplan says she's not focused on what her rivals are doing endorsements or otherwise.

"What matters is the votes of Oakland residents and our information shows that overwhelmingly, we are succeeding at that," Kaplan said.

While Schaaf was picking up the governor's blessing, another top contender named Joe Tuman was going door to door in East Oakland trying to curry favor with residents there.

"It would be nice to see Oakland be the place it used to be," a woman told Tuman.

"Libby's a friend and congratulations to her for getting that, but I think anybody who gets that kind of endorsement wants to remember the Sports Illustrated effect. You know Sports Illustrated, they put your picture on the cover of the magazine, you usually lose the next game you play," Tuman said.

Mayor Jean Quan's campaign sent us a statement, pointing out that Quan may not have the governor, but claiming she does have "the strongest, broadest and most diverse" coalition of endorsements in the race.