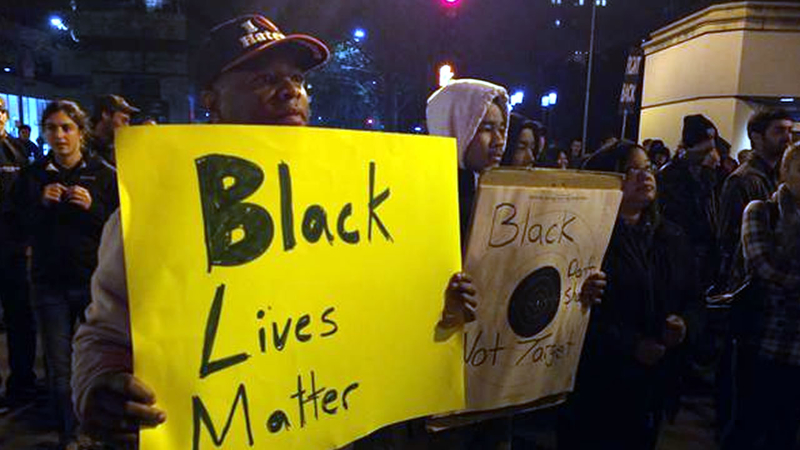 OAKLAND, Calif. (KGO) -- Protests were held across the nation after a New York grand jury decided not to charge a white New York City police officer in the choke hold death of a black man.

Eric Garner died after Officer Daniel Pantaleo used an unauthorized takedown move against him. Police say he was resisting arrest. The entire incident was captured on video.

People gathered Thursday evening around 5 p.m. at Frank Ogawa Plaza in Oakland for a protest which remained peaceful. They covered a lot of ground until 11 p.m. by marching all over downtown and to the Fruitvale BART Station where police shut it down as a precaution around 10 p.m. The station later reopened around 10:30 p.m. 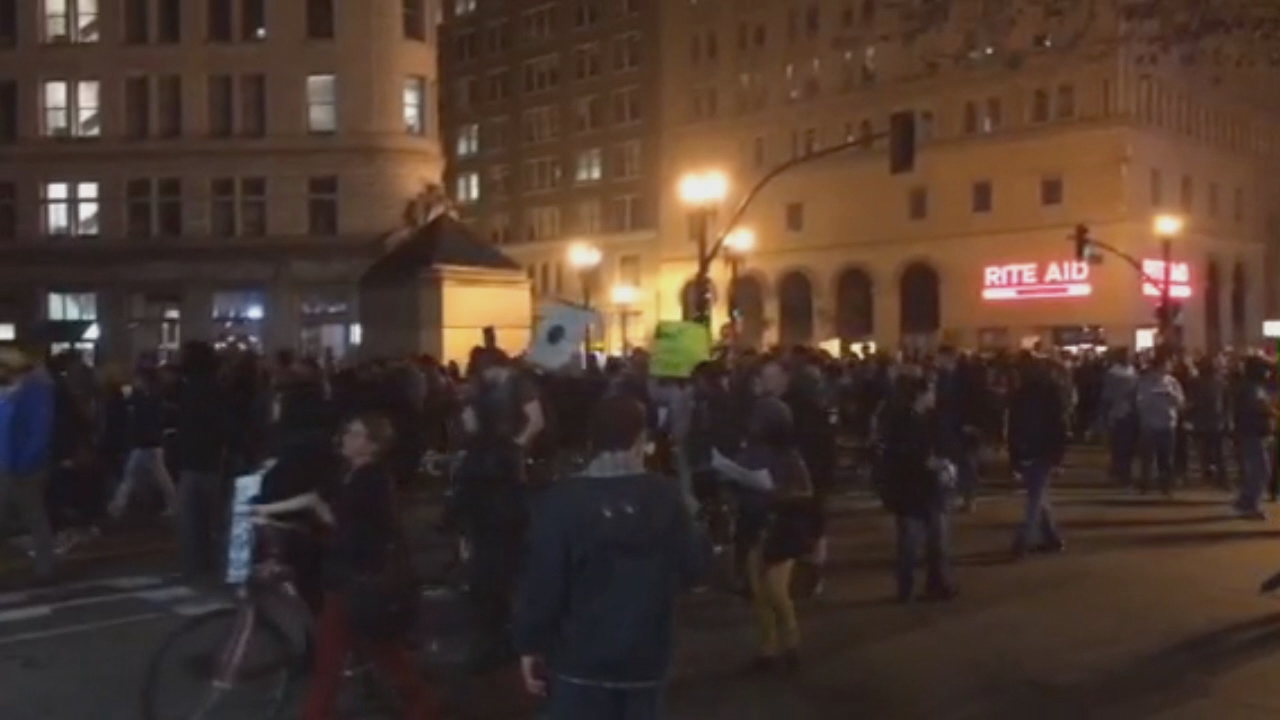 A crowd of about 150 swelled to more than 400 protesters at its height. They rallied at Broadway and 14th streets, stopping traffic temporarily, but the crowd dwindled after police halted them on International Boulevard at 22nd Avenue. There were some tense moments, then police opened up their lines and allowed the protesters to walk all the way to the Fruitvale BART Station where the gates were closed. Around 11 p.m., 15 protesters were still roaming the streets.

Two people were arrested Thursday night in Oakland for vandalizing a patrol car.

Wednesday night's march through the streets of Oakland went on for hours. There were no broken windows or street fires, but plenty of passion and a clear message.

Protest organizers explain why they're energizing people to march in Oakland 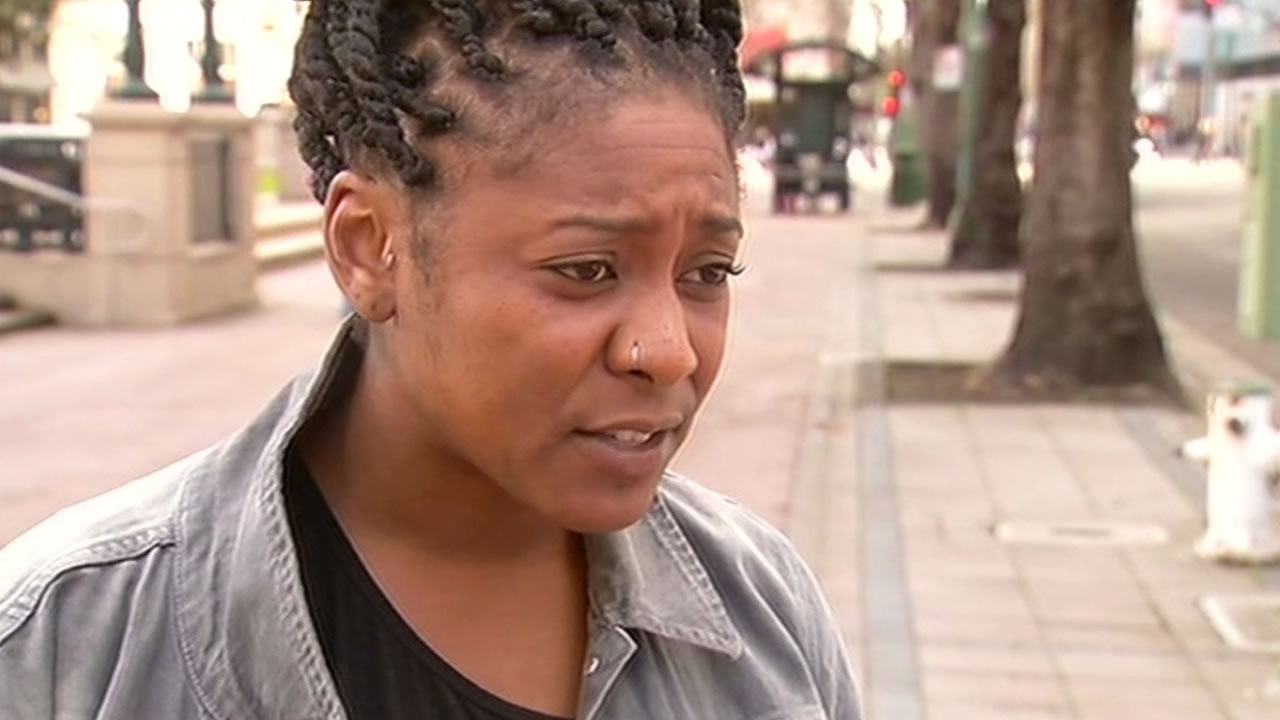 D'Andre Teeter is a Bay Area leader for the Stop Mass Incarceration Network which organized Wednesday night's peaceful demonstration. He said, "I think the larger goal is actually waking people up to the horror of what's going on and I think the demonstrations of the last couple of weeks, have."

"We've done a lot of work to make sure that folks who are doing activism online also take that activism offline," Alicia Marquez of Oakland said.

Marquez is a co-founder of the Black Lives Matter movement, including the hash tag #BlackLivesMatter that's being used all over the country. She participated in last Friday's shutdown of the BART system at the West Oakland station.

"We know that the people are watching the protests from their living rooms and it's not coming into their community and we wanted to make sure that folks really felt like there's something happening in this country that we really need to deal with," Marquez said. 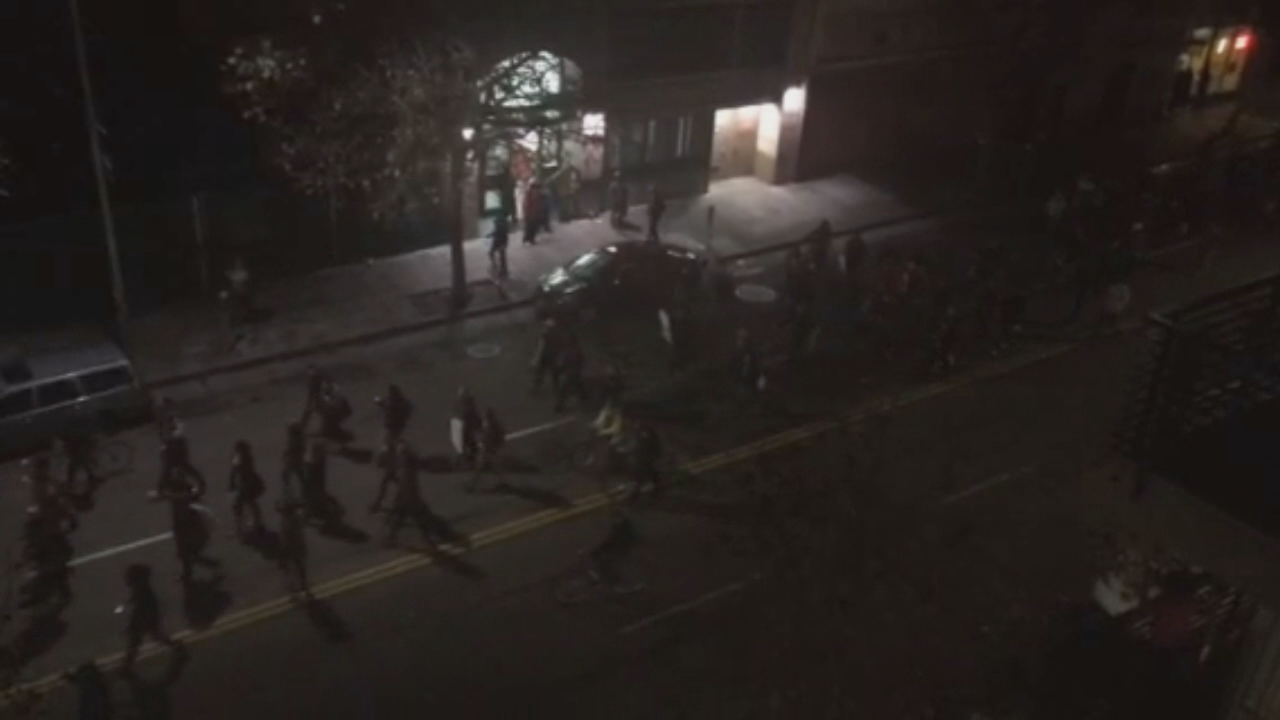 RAW VIDEO: Residents watch Oakland protest move down street
This is what some Oakland residents saw as protesters marched down with police cars slowing following them.

Jason "Shake" Anderson was an outspoken leader of the Occupy movement three years ago. He most recently ran for mayor of Oakland. Though he thinks they have some value, Anderson has not participated in any of the recent street marches.

In San Francisco Thursday night, Market Street was briefly closed at Powell Street due to a "die-in" protest and buses were rerouted around the area, according city transit officials. Market Street has cleared and traffic resumed as protesters moved out of the street.

A rally against police brutality was also held at UC Berkeley's Sproul Plaza earlier on Thursday and another demonstration is scheduled for Saturday on Telegraph Avenue.

Oakland police are preparing for more protests on Friday and Saturday.