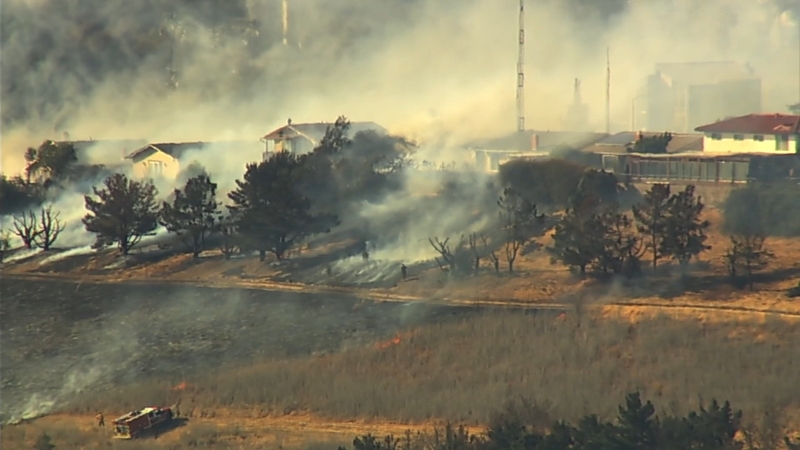 Vallejo fire damages at least half a dozen homes

VALLEJO, Calif. (KGO) -- At least half a dozen homes were damaged by a fast-moving grass fire in Vallejo Tuesday evening.

The flames were first reported around 5:20 p.m. on Skyline Drive, and quickly escalated to three alarms, then four. Residents in the area were forced to evacuate for several hours.

Our SKY7 chopper flew over the scene, where some were fighting those flames with garden hoses.

One man was doing just that, frantically trying to save his property. Seconds later that same man dropped his hose and ran to create a ditch, or fire line.

He was one of many neighbors who did what they could to try and save their homes from these flames.

"It was coming up and over the railing of the house, so I went ahead and grabbed the water hose and started wetting everything down with my neighbor. He was doing his house too," one of these fire-fighting residents told ABC7 News.

SKY7 captured video of a man on his fence post, spraying the fire with water from his garden hose as smoke appeared to nearly overwhelmed him.

Multiple acres burned on the Vallejo hillside and multiple homes were damaged near Skyline Drive and Silverview Court.

"Significant damage to two to three and at least probably six to eight have been damaged of some sort," said Battalion Chief Cliff Campbell of Vallejo Fire.

RELATED: How bad will the CA fire season be? Here's what we know, what we don't

A woman who lives in one of those badly damaged homes, had to be taken to the hospital for smoke inhalation.

The winds created all sorts of problems. Damaged homes weren't just along the hillside fire line, they were scattered throughout the neighborhood.

"My husband ran across the street to her house got up on the roof and started watering. He saved their house because the flames were coming up in their yard," said Desiree Hansen who lives in the neighborhood.

Some are just hoping that the lingering smoke will clear soon, "waiting for the trucks to get out so we can get her back in, we got to open the house back up, it's filled with smoke make sure we get all smoke and smell out for her."

The cause of this fire is still under investigation. Neighbors say there has been a feud with the hillside property owner, who they say hasn't cut any of the brush, and this evening a lot of that brush burned.