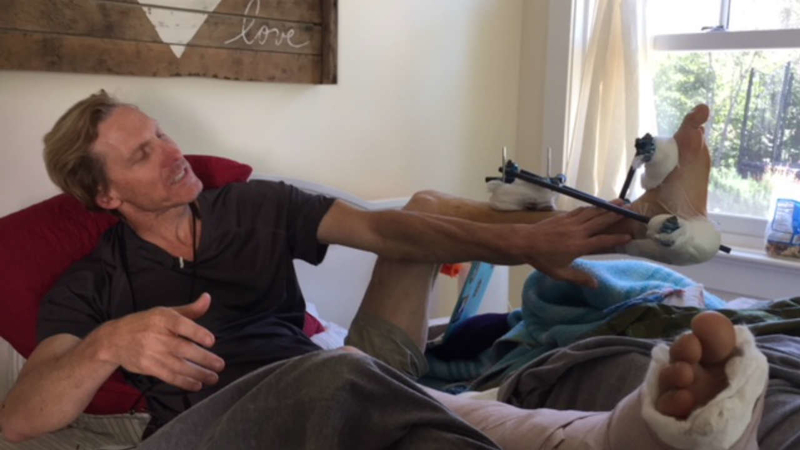 LAFAYETTE, Calif. (KGO) -- The record setting rock climber rescued from the side of Yosemite's El Capitan is telling his harrowing story now that he's back in the Bay Area.

"Fell 20 feet, caught a ledge and then my rope caught me five feet later," said Hans Florine, as he lay in bed in Lafayette, with both legs elevated above his head, badly broken.

It's a climb he made 177 times before, without incident. Until Thursday, when the famed Bay Area climber found himself suddenly plunging from the face of Yosemite's El Capitan, only to be caught, by a ledge.

"I pulled myself back up on the ledge and just sat there and looked at my leg being bent at the side and I just pulled out my phone and called 911," said the 53 year old Florine.

"I was placing a small wedge placed piece of metal...we call it a stopper, or a nut... and you test it," explained Florine of the seconds before the fall. "You step on it and it feels OK and then you step on it and place another piece. Well, after I tested it, it popped out and I fell and the piece below me held, but there was enough rope length where I fell and hit the ledge," said Florine.

Florine's climbing partner heard both his screams and the sound of his gear slamming against the rock.

The Lafayette father of two teenagers knew right away that he was badly injured, the bones in both of his lower legs, shattered.

"I think from the x-rays I saw and other people's comments I will be wheelchair bound for at least a few months," said Florine.

Through it all, as he had to spend the night on the side of El Capitan awaiting rescue, Florine had the presence of mind to snap photos and post them on Instagram.

Florine has a long recovery ahead of him, but he told us one day soon he will roll himself in his wheelchair into his Diablo Rock Gym to let everyone know he's OK and determined to return to the sport he loves.

Florine told us he'll focus on the saying he likes to tell others.

"Do hard things," he said. "That's what makes it easier on you is if you choose to do the hard things, so I'll have some challenges to work on for sure."