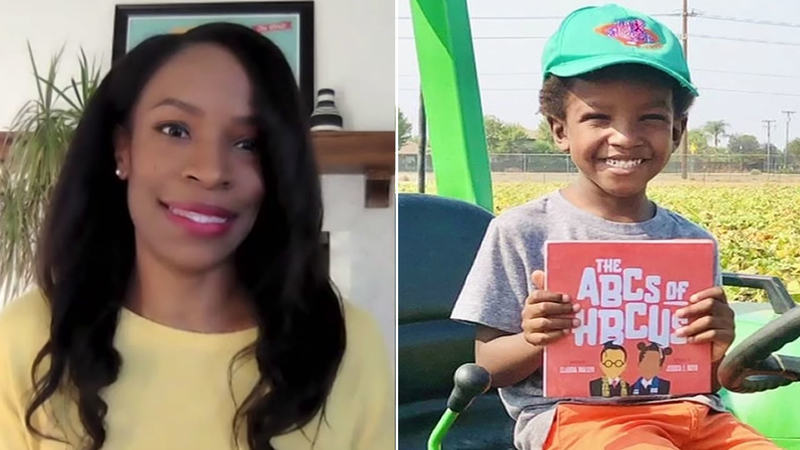 One Bay Area woman is doing her part to make sure children of all ages know about HBCUs. ABC7 News anchor and fellow HBCU graduate Kumasi Aaron spoke with Claudia Walker about her new book, "The ABC's of HBCUs."

Walker explained what made her want to write the book.

"Well, like you, I am also an alumna of an HBCU, Spelman College," Walker explained to Aaron. "And the years that I spent on that campus were so transformative. Now, as a parent and a teacher, I really wanted to encapsulate my experience into a book that I could share with readers and children all over the world."

Walker describes the book as an all-inclusive front row VIP tour for readers.

"It takes them from A to Z," Walker says. "From all of the HBCUs. From Howard to FAMU. They really learn about the different legacies, the lifestyle, the time-honored traditions, like homecoming and battle of the bands."

Walker says the book is critical for students who may be far away from HBCUs and unable to visit in person.

"I think the timing is really perfect now particularly because of quarantine. There's so many students that, even if they could have experienced a college tour, wouldn't be able to now. And I really want people to understand the value of historically Black colleges and to get the experience if not on campus, through the book and then to start those discussions."

Right now, we are seeing so many people like Vice President Kamala Harris, who attended an HBCU, really changing the narrative around what it means to be an HBCU grad. Walker said that influenced her decision to write the book.

"I'm also a high school teacher," Walker says. "And I know that so often, whether it's due to not being as familiar with HBCUs, or the myth that HBCUs are not as competitive as other schools, I really wanted this book to set the record straight. Fortunately, as you said, there's so many people who are now more visible in the media that are making sure that people recognize that HBCUs are as competitive, if not more competitive than some of the colleges that we hear a lot more of in the media."

Walker says HBCUs are a critical part of Black history that many people may not be aware of.

"Many of the people who were so instrumental in the civil rights movement, were Black college students," Walker says "And so that's, that's a part of American history that is often unknown and untalked about."

Walker says she wants readers to recognize that Black colleges have their rightful place in history.

"I also want it to be a place that that students begin to consider for their college choices if it hadn't been on their list. That's my hope for the book."