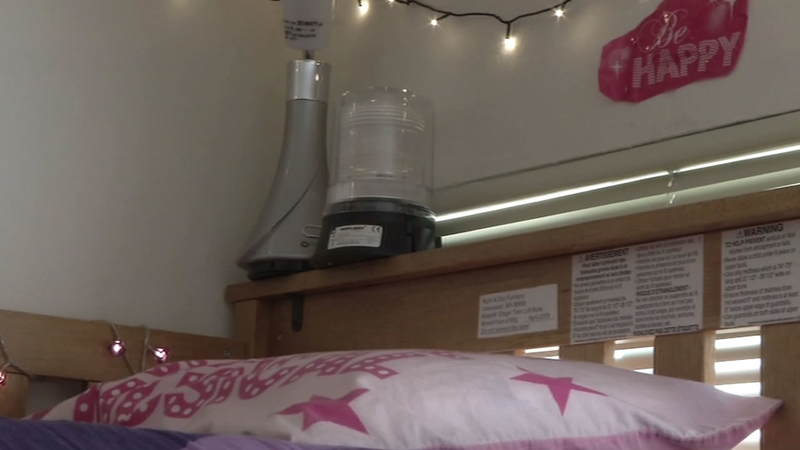 PALO ALTO, Calif. (KGO) -- Recent studies suggest a growing number of kids, especially teenagers, are actually sleep deprived. But now, researchers at one Bay Area university are developing a technology that could help kids with the worst problems sleeping.

Reina Nomura is a top high school student, who studies in a cozy library underneath her bed, but between homework, and watching YouTube on her laptop, she sometimes won't make the short trip up the ladder to her top bunk until well past midnight.

But now her bed includes an electronic device designed, not to keep her up, but to help her sleep.

"They're going to through your eyelids and get into the brain while you're asleep," Stanford sleep researcher Jamie Zeitzer, Ph.D., said.

The flashing lights were developed by sleep researcher Zeitzer and his team at Stanford. They're now using them in a clinical trial with tired teenagers.

"Now, the light doesn't wake them up, but what it does is that it kinds of fools the brain into thinking there's an earlier sunrise that there actually is," Zeitzer said.

We first profiled Zeitzer's technology when it was being tested in the form of a mask. That device allowed patients to shift their sleep cycle forward or backward by about three hours -- just enough difference to head off the effects of jet lag on a cross country trip. The new bedroom version is programmable and acts like an alarm clock for the teen's sleep cycle.

While the problem of teenagers staying up late isn't new, it is something some experts believe it's getting more serious, in part because of the way technology is changing their lives.

Dr. Rafael Pelayo counsels students and parents at Stanford's sleep clinic. He says increased screen time on everything from cellphones to laptops is reshaping the evening routine.

"We need to have new rules and courtesies developed. Is it ok to text after 10 P.M., for example. We never got phone calls after 10 p.m. because the phone would ring and disturb other members of the house. But teenagers are routinely woken up by text messages," Rafael Pelayo told ABC7 News.

The research team provides tips include shifting some recreational screen time to the morning, as an incentive to go to sleep and get up.

Nomura is hoping the combination of the light therapy with some adjustments to her evening routine, will help her step up the ladder, to a better night's sleep.

Nomura said, "I have bad sleeping habits, but I'm a deep sleeper."

The Centers for Disease Control has also released recommendations for pushing back start times at schools across the country to no earlier than 8:30 to give kids a chance to sleep longer.