History of how many people are homeless in the Bay Area

SAN FRANCISCO (KGO) -- ABC7 News is committed to Building a Better Bay Area, which means that we dig deep into what's affecting our quality of life and look for solutions. To make improvements, it's important to first understand the issue. That's why we have researched the number of homeless people in each of the Bay Area's nine counties going back to 2007. Data for 2019 is added as each county reports results from the 2019 Homeless Census. Federal data is not expected to be released for 2019 until December.

Alameda consistently uses the federal definition of homelessness. It is the Bay Area's third most populous county and in back to back census years it has set records for the increase in the percentage of homeless. The 2019 total tops 8,000 for the first time. That's a 43% increase from the 2017 amount, and nearly double the number of homeless from the 2015 census. Half of Alameda County's homeless live in Oakland. 14 percent live in Berkeley, which has topped one-thousand homeless for the first time. 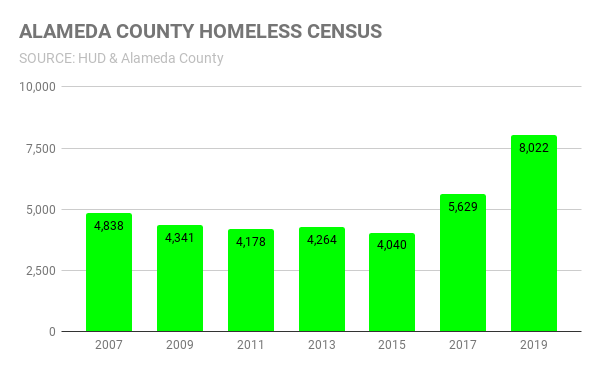 CONTRA COSTA COUNTY
Contra Costa and Alameda are neighboring counties and reported a nearly identical percent increase in the number of homeless people, 43 percent, between 2017 and 2019. There are now 2,295 homeless people reported in Contra Costa County. While it's a significant increase from 2017, this is the second lowest homeless population total since 2007. Contra Costa is one of five Bay Area counties that have occasionally varied the definition of homeless from the federal standard. Contra Costa now only reports people who are "actively homeless in our system of care". The county no longer includes data from school districts. 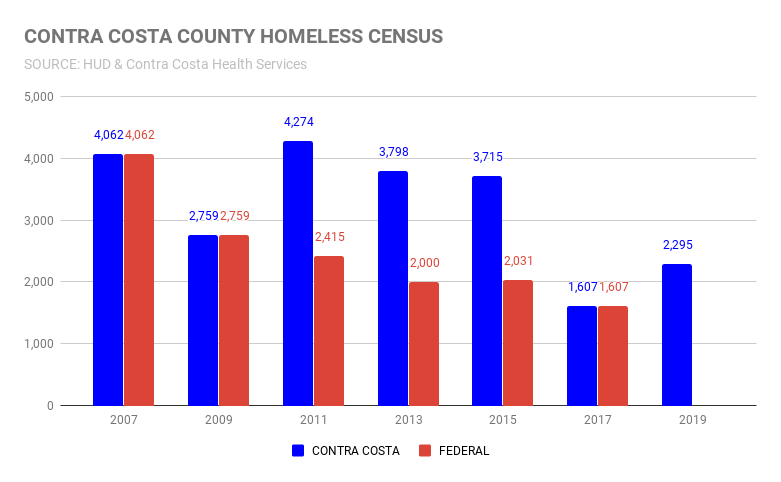 MARIN COUNTY
The number of homeless in Marin county dropped seven percent between 2017 and 2019. There was also a significant drop in the number of people identified as chronic homelessness.
Marin has varied both its method of conducting the census and the definition of homelessness over the years. In 2017, Marin switched solely to the federal definition. 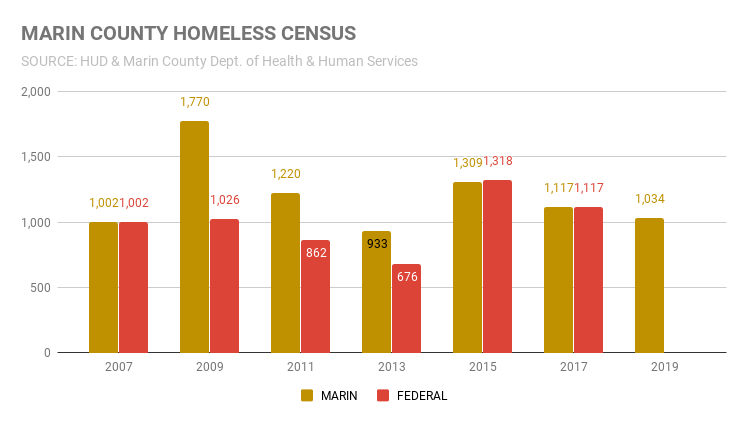 NAPA COUNTY
Napa is the Bay Area's smallest county by population and has the smallest homeless population. That population has increased steadily at every census from 2011 through 2019. This is the only one of the Bay Area's nine counties to show that trend. Napa County has consistently used the federal definition in reporting. 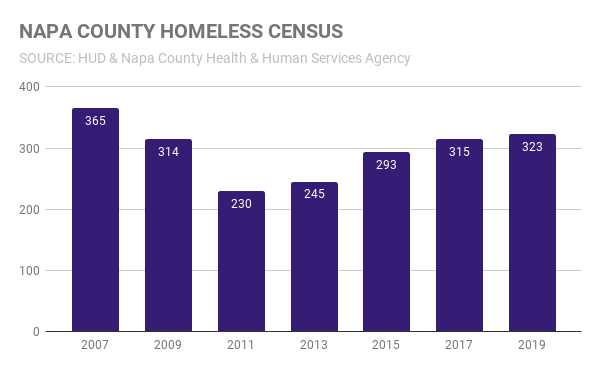 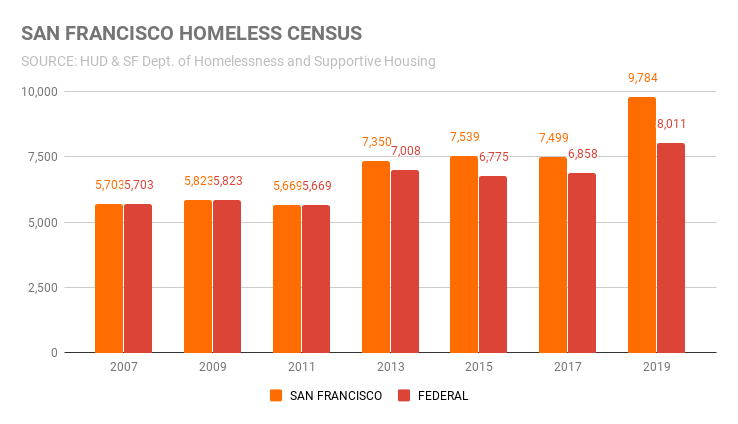 SAN MATEO COUNTY
The number of people living in RVs has driven up the number of homeless in San Mateo County. The number of RV dwellers rose 127 percent, and the overall homeless population increased by 21 percent between 2017 and 2019. A little more than 1,500 people are homeless in this county, with the largest numbers living in Redwood City, Pacifica, and East Palo Alto.
San Mateo is one of five Bay Area counties to occasionally vary the definition of homelessness for the purposes of the census. "For the local report we utilize local context regarding categorizing and including programs that serve some people experiencing homelessness," says Michelle Durand, of the San Mateo County Human Services Agency. Starting in 2015, San Mateo chose to use only the federal definition of homelessness. 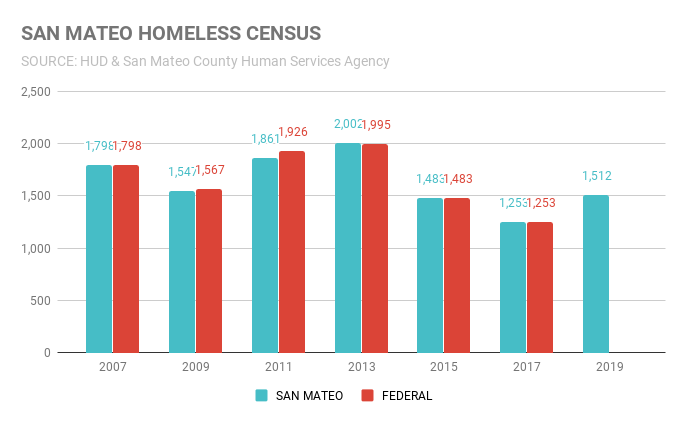 SANTA CLARA COUNTY
The Bay Area's most populous county had maintained a fairly steady homeless population since 2007, but 2019 is a different story. The homeless population now approaches 10,000. The total increased 31 percent from 2017. More than 6,000 of the homeless live in the city of San Jose. Santa Clara county has consistently used the federal definition of homelessness for its reporting. 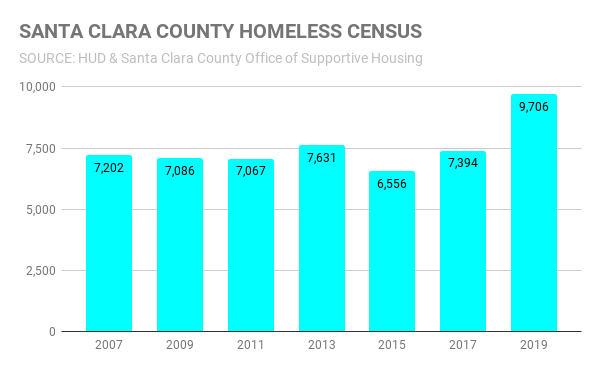 This is one of the few Bay Area counties to record a decrease in the number of overall homeless between 2017 and 2019, with a seven percent decline.
Beginning in 2015, Solano county has used the federal definition of homelessness. The county was not able to provide information about what definition was used for the census prior to 2015. 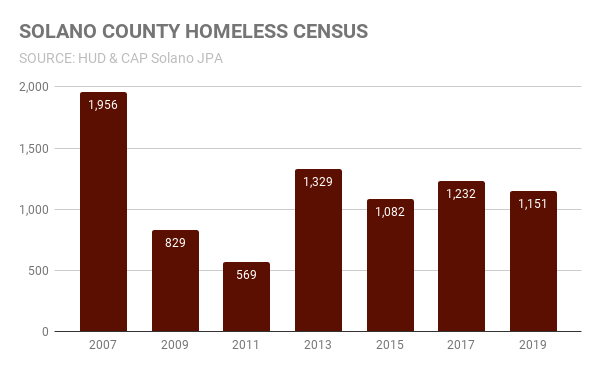 SONOMA COUNTY
Two years after the North Bay Wildfires, the number of homeless in Sonoma County has only risen by four percent. The total of 2,951 people is the second lowest in a decade.

In Sonoma, there are minor differences between county data and federal data due to errors in reporting. 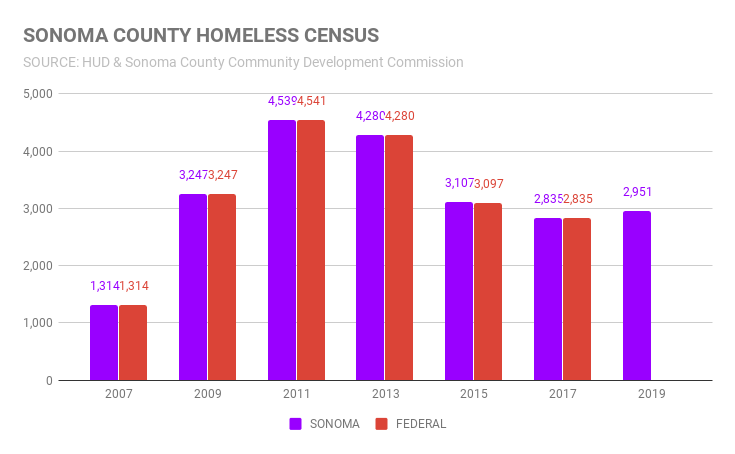 The federal government, through the Department of Housing and Urban Development, requires counties to conduct a census of the local homeless population every two years to be eligible for federal funding. These "Point-in-Time Counts" are held across the country on a single night in late January every odd-numbered year. The federal government uses the following definition of homelessness:
An individual or family living in a supervised publicly or privately operated shelter designated to provide temporary living arrangement (including congregate shelters, transitional housing, and hotels and motels paid for by charitable organizations or by federal, state, or local government programs for low-income individuals), or an individual or family with a primary nighttime residence that is a public or private place not designed for or ordinarily used as a regular sleeping accommodation for human beings, including a car, park, abandoned building, bus or train station, airport, or camping ground.