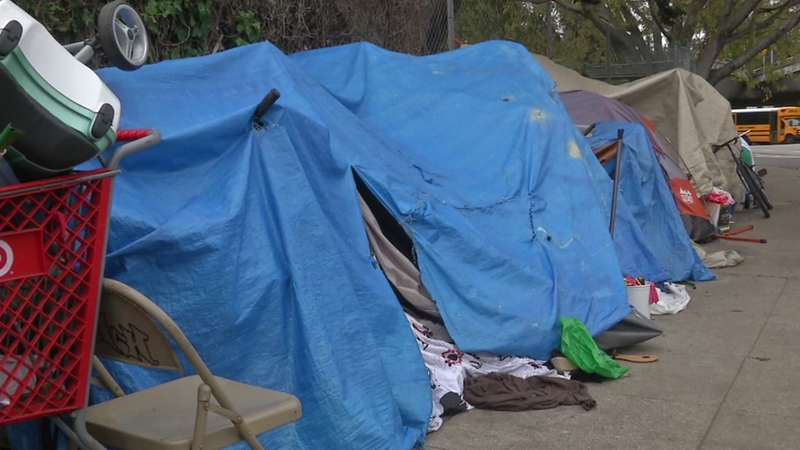 SAN FRANCISCO (KGO) -- Today ABC7 joins 70 other media outlets in taking a closer look at the homeless crisis in San Francisco. We took a closer look at a neighborhood inundated by homeless and the frustration both inside and outside the encampments.

Welcome to the neighborhood, San Francisco's Mission District. We have alighted on a somewhat twisted definition of neighborliness along Potrero Avenue in San Francisco.

No one appreciates this more than wife, mother, and event designer Jennine Jacobs. "Well it hurts my heart because I don't like seeing people suffer," said Jacobs.

Those people are fellow citizens, like Joseph Lum, who resides just up the street. Lum has been out here for ten years. "Nobody ever talks to me," said Lum.

Indeed, they're the twain that rarely meet, sharing an uneasy coexistence. "I don't feel sorry for them. I don't feel pity. I feel angry because there is nothing I can do," said Jacobs.

Though she has certainly tried, she's taken her case right to the steps of city hall, in fact, and pitched a tent right under noses of San Francisco officials. This is what it's like to have the homeless in your front yard, she was saying. "There are people living on the streets and the city is slow to deal with it," Jacobs told ABC7 News.

Pick a neighborhood, except, maybe Nob Hill or Pacific Heights, and this is the human blight greeting residents every day. The sidewalks claimed in unofficial turf wars, tax paying citizens avoiding contact by walking around this third world reality in a supposedly world-class city. "(I) just get nasty glares and odd stares," said Lum, who said he understood why people might do that.

If you get the feeling that people are conflicted, you're right. Homeowners do have hearts and in some cases, histories. Ask Jennine about her father. He used to be a street alcoholic. "Of course I am conflicted," she said.

Ultimately, after years on the streets of San Diego and elsewhere, he pulled himself out, earned a law degree and made it back into the world. But, it was his decision.

We asked: How do you help people who don't want to help themselves?

Jennine's is frustrated. Talk is cheap, she says and outside of her front window, the problem keeps growing no matter what the city says it is doing.

"The city has $9.6 billion in its budget and they can't figure this out?" she said.

ABC7 News asked Lum if someone offered you a life off the street, would he take it. "Yeah," he said, without hesitation.

That is easier said, than done, though. "It's not the tax dollars we mind paying" said Jacobs, "It's that we don't see them."