How small businesses survived the pandemic 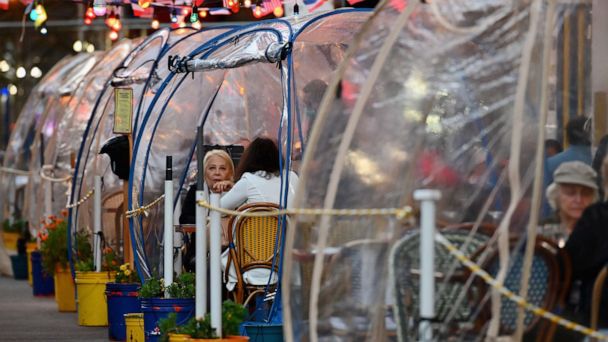 As in-person experiences, such as shopping and going out to eat, were halted for a significant amount of time during the pandemic, small businesses had to find ways to survive.

"We were gearing up to offer wine tastings, cocktail making and cooking classes in people's homes, but when the pandemic hit, it upended our entire business model and plans," Michael Wolkon, co-founder of Night Inn, told ABC News. "So then we started in June of 2020 offering virtual wine tastings to individual groups at home, as well as corporate clients who wanted to do virtual happy hours across the entire country."


Night Inn, founded by Wolkon, Rena Ogura and Ryan Lane also turned these virtual tastings into a way to give back to an industry that was so badly hit by the pandemic by hiring bartenders and sommeliers who were laid off.

"They're really excited about this opportunity to completely work on their own time and make an additional income stream," Wolkon said.

More importantly, they found that their virtual experiences were giving people the togetherness they longed for as they were separated for months.

"We love the idea and the feeling of community that you can have just by being in a private space with the people you care about," Ogura said. "What the online model demonstrated to us and what we've heard from our guests is that this has been one of the very few ways in which they've felt truly connected and truly together with their families."

"We have our professional from California talking to people in New York," Lane added. "And that family in New York has cousins out in Denver, and it brings everyone together just from one sitting. It was one of the hidden gems from virtual that we discovered."


Night Inn continues to help industry professionals like restaurateurs, bartenders and sommeliers as they plan to expand to in-person tastings and experiences with a COVID-19 protocol set in place.

Jeanette Mulvey, editor-in-chief of CO-, a publication by the U.S. Chamber of Commerce, said she has seen this trend happen over time with online and e-commerce sites.

"The pandemic has allowed many small businesses to shift from local-only to serving a national audience. I've seen this over and over again where businesses -- out of necessity -- moved to e-commerce and grew a national customer base," Mulvey told ABC News.

Eliza Blank, founder and CEO of The Sill, a plant delivery business that also offers educational workshops, never expected something like the pandemic to happen. She knew adjustments needed to be made from how she initially founded the business in 2012, she said, and felt she needed to utilize its online space more to build a sense of a community that the pandemic had taken away.

Blank moved The Sill's workshops online, and she found that people were "craving a connection over something that was a shared experience."


"We were able to offer this community not only the plant products that they needed and craved, but the platform to then connect with each other and have that shared experience when so many of us became socially distanced and weren't really engaging socially in real life," Blank told ABC News.

"The upside of the online experience is that you are able to connect with people who you wouldn't naturally connect with," Blank added. "Whether it was to beautify their space, to nurture or take care of something, to bring the outdoors in or, quite frankly, just like as a hobby, people were using this as a way to also cope with all the spare time we had in quarantine."

Even as things slowly return to normal, the businesses are still working to find more ways to innovate, and they also plan to maintain the changes they had to make in order to keep their businesses alive.