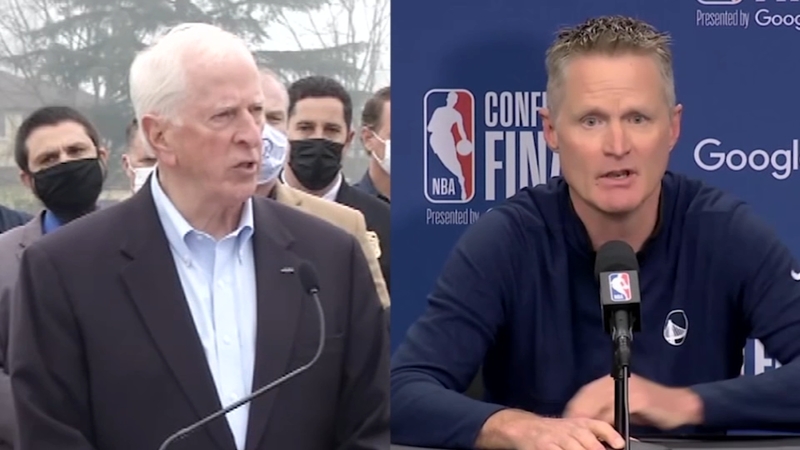 SAN FRANCISCO (KGO) -- Warriors head coach Steve Kerr called out a specific piece of legislation in a passionate press conference Tuesday -- H.R.8. Here's what the House bill aims to do.

"There's 50 senators who refuse to vote on H.R.8, which is a background check rule that the House passed a couple years ago," said Coach Kerr. "It's been sitting there for two years."

Currently, there is no universal federal law that required background checks for gun sales and transfers by unlicensed and private sellers. This bill aims to change that and would expand that requirement in every state.

It passed the House for the second time in March of last year -- but remains stalled in the Senate, again.

Thompson, an avid hunter and Vietnam War veteran, has been fighting to pass universal gun background check legislation for nearly a decade. He's the chairman of the House Democrats' Gun Violence Prevention Taskforce that was formed in response to the Sandy Hook Elementary School massacre that killed 26 people, 20 of whom were children.

"I'm fed up, I've had enough," Kerr said reacting to the Texas elementary school shooting that killed at least 19 children and two teachers on Tuesday. "They won't vote on it because they want to hold onto their own power. It's pathetic."
Thompson says he stands by Coach Kerr -- adding he's been a close ally in the fight against gun violence.

WATCH: Warriors' Steve Kerr says we can't get numb to this, calls on senators to act
EMBED More News Videos

"Coach Kerr has worked with me on the issue of gun violence prevention for a long time," said Thompson. "He's a great ally and he has personal experience with gun violence. His father was murdered. He wants to make a change."

Multiple polls conducted over the past decade show more than 90 percent of Americans support universal gun background checks. California Senator Alex Padilla co-sponsored Thompson's companion legislation in the U.S. Senate. Padilla is one of 43 senators in support of the bill.

"We can not sit idly by and watch our children in America die," said Padilla during a Senate Judiciary committee hearing Wednesday.

Rep. Thompson told ABC7 he will take additional action in the house on the week of Jan. 6 -- including a bill that would allow for notifications if there is an active shooter and a bill that would implement red flag laws. Red flag laws, also known as extreme risk protection orders, would remove guns from people deemed to be a danger to themselves or others for up to a year.

"If passed, it would allow law enforcement to intercede if someone is in danger before the tragedy happens," said Thompson.