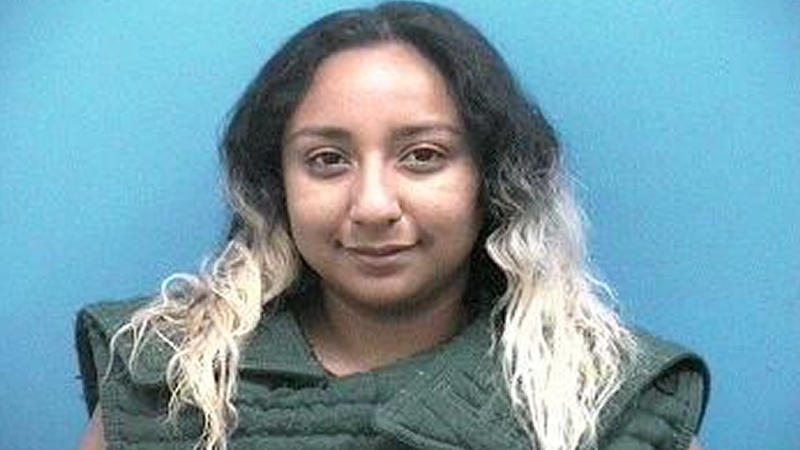 FLORIDA (KGO) -- The 19-year-old woman at the center of the Oakland police sex scandal has been arrested after a violent outburst at a Florida rehab center.

The ABC7 I-Team's Dan Noyes was the first reporter to do an in-depth interview with the woman who called herself Celeste Guap. She said she had sex with more than 30 Bay Area cops from at least seven different law enforcement agencies, including some when she was underage. Her name surfaced after one of those officers committed suicide. Currently, at least five Bay Area police agencies still have internal personnel investigations pending.

After just three days in rehab, Guap, whose real name is Jasmine Abuslin, is locked up on an aggravated battery charge, which is a felony. She's being held at the Martin County Jail in Florida on $300,000 bail.

Abuslin arrived at the Treasure Coast Recovery Center in Stuart on Friday, the day after her 19th birthday.

Before she left California, she told Dan she was excited and nervous about getting treatment for heroin and sex addiction.

The rehab and treatment program is paid for by a victim's fund.

But just three days after arriving, she was "being abusive towards staff," according to a Martin County Sheriff's Office incident report.

It says she "ran outside the front of the facility" and "removed the clothing covering her chest and began flashing passing motorists."

After workers got her back inside, the report says she started a physical altercation and began screaming at employees and then lunged at a female security guard.

When a male security guard attempted to restrain her, the report states she bit the man on the forearm.

Martin County Sheriff's deputies viewed security video of the incident at the rehab center before taking Abuslin into custody.

According to the deputies' report obtained by the ABC7 News I-Team, the video shows her causing the altercation, lunging at security officers, and attempting to pull a safe over, but the camera did not catch her biting the guard.

After being placed under arrest and handcuffed, she slipped out of the handcuffs and a smaller pair had to be used. Once deputies put Abuslin in the back of their patrol car, the report says she repeatedly hit her head against the window.

According to an arrest affidavit, the security guard that Abuslin bit was en route to a local hospital.

The affidavit also says "during the entire incident and transport, Abuslin was attempting to solicit sex from deputies".

No date has been set yet for her next court appearance.

Richmond Police Assistant Chief Bisa French said she could not comment because there is still a pending internal personnel investigation into the conduct of several current and former police officers.

On the way to the rehab center, Abuslin called and texted Dan Noyes. In what turned out to be an idle threat, Abuslin said she was going to jump out of the recovery center's van on the highway to try to kill herself. She also told Dan she was in contact with a Miami pimp, who would pick her up from the rehab center if it didn't go well.

Sarai Smith-Mazariegos, who's Oakland nonprofit helps survivors of sex trafficking and exploitation, is concerned, but not surprised by the teenager's behavior.

"Behavior is the effect of trauma. It's not that she's a bad person or she's horrible. It's the fact that she's dealing with a lot of trauma. She doesn't even understand her own victimization," Smith-Mazariegos said.

Smith-Mazariegos believes getting help is the first step, but healing may take years.