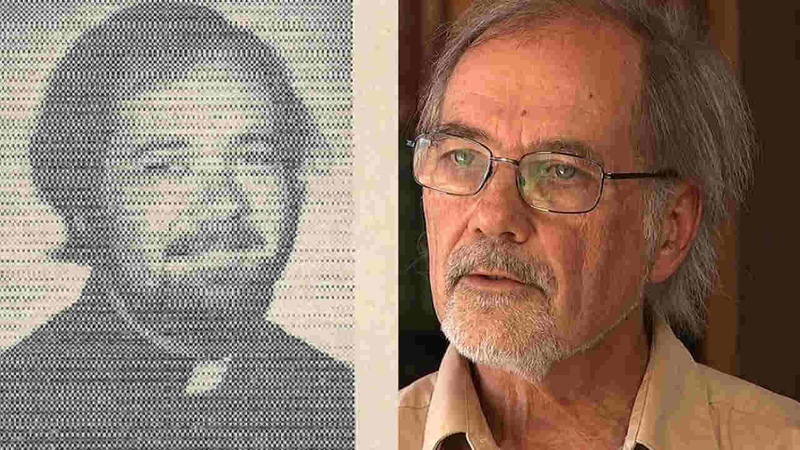 SAN RAFAEL, Calif. (KGO) -- A Marin County man was forced to confront his past, after his name appears on a list of clergy accused of child sexual abuse.

This former priest was very forthcoming, answering most of the questions. He's trying to explain himself-not just to us, but to his family and friends and coworkers.

63-year-old Michael Sintef has a nice home in West Marin, a wife and daughter in college, a job where he's appreciated.

At a Board of Supervisors meeting in January, Marin County Supervisor Katie Rice told Sintef, "Very well deserved. Thank you for what you do for the community."

The county awarded Sintef "December employee of the month" for his work in the Public Guardian Program.

Life was good. Then, this list surfaced-published by the Catholic Archdiocese of Los Angeles. Priests accused of sexual misconduct. Number 14, Michael Sintef.

Dan Noyes: "What reaction did you have when you finally realized that this is coming out?"

Michael Sintef: "I felt nauseous. This is something no one has heard from me and so now people hear it and I get painted by that."

Sintef served as Associate Pastor at St. John the Baptist in Baldwin Park. He was 28, when a 15-year-old girl caught his eye.

Dan Noyes: "So, I just want to be clear that you met her when she was 15. At what point did it become sexual?"

The girl told her therapist who called police. The investigator's report obtained by the I-Team says, "Minor has disclosed to counselor that she has been having sexual activity with her parish priest, Father Mike ... heavy petting and kissing. They watch television together when her parents have gone to bed."

Dan Noyes: "Wasn't there just alarms going off in your head-"

Michael Sintef: "There should have been."

Dan Noyes: "-as you're touching her saying, 'This isn't right'?"

Michael Sintef: "There should have been, yeah."

Dan Noyes: "How do you explain that?"

Michael Sintef: "You're asking me something I can't answer."

Police did not pursue criminal charges, but sent the report to the Archdiocese of Los Angeles who warned Sintef.

He said, "It was a stern warning to avoid that relationship in the future."

But, Sintef didn't stop. Several years passed and he says the Archdiocese sent him to a Maryland treatment center for evaluation.

Shortly after, Sintef tells Dan Noyes he decided to leave the priesthood-what he sees as a positive move-and he credits that 17 year-old girl.

"This was a relationship that I felt responsible for," said Sintef. "It was important to me, I was still in love with her."

Sintef and the girl drifted apart after she went to college and turned 21. The I-Team reached her, now a mother living on the central coast. She tells us, "The relationship was inappropriate and complicated and I harbor no ill feelings toward Michael."

Dan McNevin of the Survivors Network of Those Abused by Priests believes, "This is sex and power."

Advocates for survivors of clergy sexual abuse now question Sintef working with a population of vulnerable adults as a Marin County deputy public guardian, after his actions with that teenage girl.

"I understand what they're saying," answered Sintef. "And maybe if I was in a position where I'm making a decision to hire someone, it would give me red flags too, but I'm on the inside of me, I mean, I know I'm fine

Before his job with Marin County, Sintef worked as a hypnotherapist-he tells us he's had no other complaints of any sort, since his time as a priest.

Dan Noyes: "Do you feel as though it's not fair that this is brought up after so long?"

Michael Sintef: "I don't know, I'm not going to say what's fair and not fair, I mean I was unfair, I can say that and so maybe this is karma, I don't know."

Sintef says he'd like to apologize to the girl, for the "chaos and confusion and trouble" he may have caused her. Marin County didn't know this information when Sintef was hired in 2010 -- the LA Archdiocese published that list in 2013. And now, the county tells me they can't comment on a personnel issue.