Michael Kwong of San Francisco was convicted in the first major prosecution under California's ban on shark fins.

SAN FRANCISCO (KGO) -- The first major prosecution under California's ban on shark fins ended in a conviction on Friday in the Bay Area. A San Francisco man was caught with a literal ton of shark fins.

This is a case the ABC7 News I-Team has been covering from the start and Dan Noyes was the only journalist in the courtroom Friday to follow this story.

This conviction is a major step since it was an enormous battle to get the law passed. And Michael Kwong was no small player. He was a shark fin wholesaler who fought against the ban.

The prosecution agreed to drop three misdemeanor counts against 43-year-old Kwong, but he entered a plea to one count, a violation of Fish and Game Code 2021 -- the shark fin ban.

In court Kwong simply said, "No contest, your honor."

The defense tried to argue that the January 2014 search of Kwong's warehouse in San Francisco was improper. Game wardens found more than 2,000 pounds of shark fin in various forms -- whole fins, some ground into powder.

"We're disappointed, I mean we thought we had a pretty good motion we could run today. It was a search and seizure motion and we think there were some problems with the validity of the administrative inspection that was conducted on Michael's property back in January," Kwong's attorney John Campion told the I-Team.

Still, the judge sided with the prosecution and urged the two sides to strike a deal. As a result of his conviction, Kwong was sentenced to 30 days in county jail, which he can serve in the sheriff's work program. He also gets three years' probation, but most important of all, he forfeits the ton of shark fin, with a black market value of $1 million or more.

Some activists were upset that Kwong was getting off with misdemeanor charges.

Noyes: "What do you say to the activists who are upset about the thousands of sharks those fins represent?"

Campion: "Well, I mean we are just following the law... I mean, the activist, they got the law and enacted, and now somebody's been convicted."

This is an important victory for the activists, especially since Kwong was one of the shark fin bans most vocal opponents, appearing at hearings in Sacramento.

At a hearing on Aug. 15, 2011 he said, "My name is Michael Kwong. I'm the fourth generation in my family to be involved in shark fin business."

After his conviction Friday, Kwong did not want to comment, nor did the prosecution.

The judge ordered the ton of shark fins to be preserved for nine months, in case they are needed as evidence in appeals. The district attorney's office tells the I-Team they are arranging for at least some of the fins to be used in research into the shark population, and the dangers the sharks face. 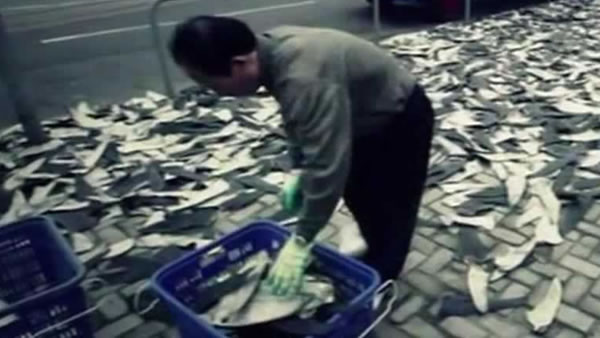