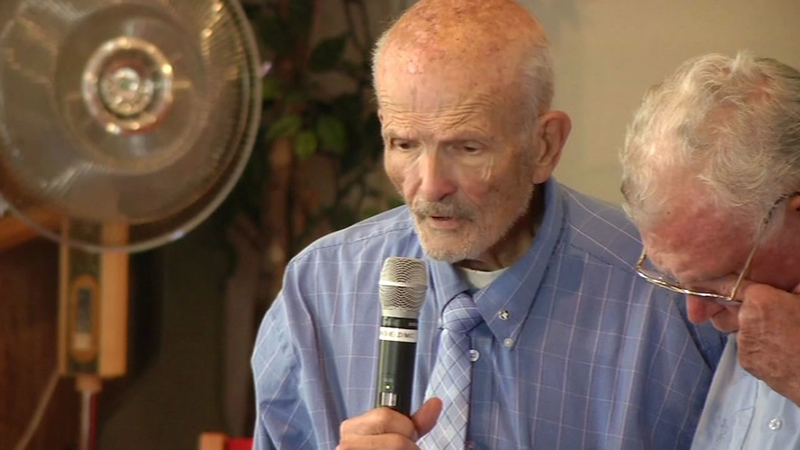 HAYWARD, Calif. (KGO) -- For more than 50 years, a church leader from Hayward has been keeping a secret from his own wife and children, his friends, and members of his congregation. After an ABC7 News I-Team investigation, he has been forced to make a public confession and step down from his church position.

The I-Team has been reporting on this issue for years, and this case of stolen valor may be the most extreme thus far. When a person exaggerates their service record, one might think it's a harmless lie. But it is very serious to the families of those who gave their lives for this country.

People who know 73-year-old Mike Fortner say that he'd tell anyone who would listen that he's a retired Navy SEAL. His wife of 41 years believed him. Their children grew up thinking their dad was a hero, and the congregation at First Southern Baptist Church in San Lorenzo heard the repeated stories from Deacon Fortner, who also played bass on Sundays.

"Almost instantly, if you came to the church, he would want to tell you about his SEAL background," said First Southern Baptist Pastor Tim Hines.

Fortner told the lie one too many times at a meeting of "Homebuilders", a parents' workshop at Three Crosses Neighborhood Church in Castro Valley. They recorded the session this summer and posted it online.

"You served in the SEALs, and you know this better than I do, nine years," said Three Crosses' Mark Teyler in the video.
"Nine years, nine months, 26 days and 17 hours," replied Fortner.

For more than 30 minutes, Fortner talked about his dangerous life as a special warfare operator, claiming he jumped from a plane six miles up, and dove 370 feet to a disabled submarine.

"All we did was bang on the submarine to see if anybody was still alive," said Fortner.

He pointed to the spot where a grenade supposedly injured his leg and where a bullet pierced his shoulder. He also talked about killing a 14-year-old boy in Vietnam.

"I had no choice. I still see his face," said Fortner.

A member of Fortner's church forwarded that video to Don Shipley, an actual retired Navy SEAL.

"Every one of those insane stories he's been telling are lies," Shipley said.

Shipley runs a SEAL-styled training camp in Virginia, and spends much of his time responding to questions about impostors from around the country. He has access to a database of everyone who has served as a SEAL, fewer than 10,000 men alive today. Shipley told the I-Team that Fortner never was a Navy SEAL, and that his position in the church concerns him.

"This guy isn't selling used cars to people, he's a deacon in the church," said Shipley. "He holds a superior position in that, and people turn to these guys for help."

The I-Team obtained documents from the National Personnel Records Center that show that Fortner did serve almost 10 years in the Navy as a radarman during the 1960s, but he was not a SEAL. The I-Team reached out to Fortner and asked to interview him about that online video. He declined, so we knocked on his door.

It took a while for Fortner to stop 50 years of lies, so I pressed him about that recording. Fortner had said that he was a SEAL Team 1, 2 and 6 leader, but Seal Team 6 didn't even come into existence until the 1980s. Fortner finally broke after we explained that the names of anyone who had attended basic underwater demolition SEAL or BUD/S training are public, and that he is not on the list.

NOYES: "Every Navy SEAL who underwent BUD/S training, that's part of the public record. I'd be able to find that out. You did not attend BUD/S training, did you?"
FORTNER: "Alright. You're right."

The I-Team pressed Fortner on why he told the lie in the first place, and how it continued for so long.

Fortner confessed at the next church service and the pastor invited the I-Team to film it.

"I'm doing it because God began to talk to me, and please forgive me. I'm sorry I did it," Fortner told the congregation.

Shipley said that Fortner has done an incredible amount of damage for five decades, gaining people's trust with phony stories of heroism.

"Fortner is not sorry he told those lies, he's sorry he got caught. There's not a sympathetic bone in my body for him and I'll take down anyone else that claims that Navy SEAL status when they were not," Shipley said.

Fortner had to step down as deacon. His wife and kids told the I-Team they have forgiven him.