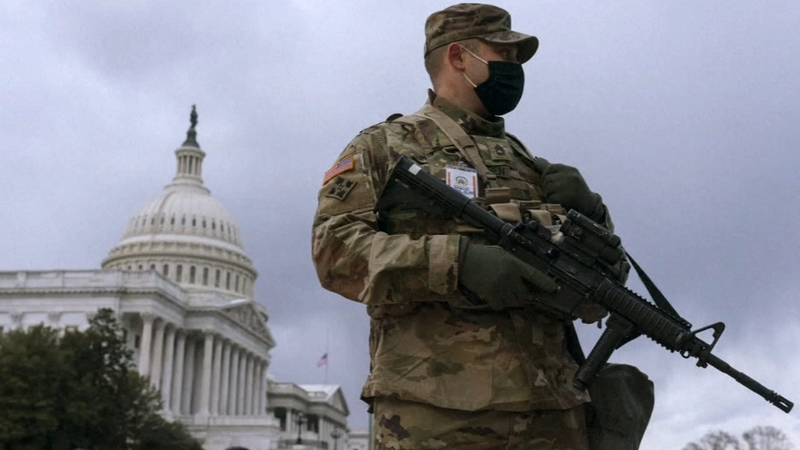 Security reaches historic level in DC ahead of inauguration

WASHINGTON -- Ahead of his inauguration, Americans by more than a 40-point margin approve of the way Joe Biden has handled the presidential transition -- but just half are confident he'll make the right decisions for the country's future, with muted expectations for his progress on key issues.

As to the man he's replacing, 68% in this ABC News/Washington Post poll oppose President Donald Trump pardoning himself for any federal crimes he may be accused of committing. And 58% support Twitter's ban on Trump, muzzling the outgoing president on his main platform.

Trump leaves office awash in controversy, as seen in results from this poll reported Friday. Biden enters on a better note: Two-thirds in this survey, produced for ABC News by Langer Research Associates, approve of how he's handled the transition. That's 27 percentage points higher than Trump four years ago.

Similarly, the 49% who express confidence in Biden to make the right decisions fall in between the same readings for the past two presidents -- lower than it was for Obama as he came into office, 61%, while higher than it was for Trump four years ago, 35%.

In another measure, despite Trump's unsupported allegations of widespread voter fraud, Americans see Biden as the legitimate winner of November's presidential election by an almost 2-to-1 margin, 62%-32%. But there are wide partisan divides: Seven in 10 Republicans and 6 in 10 conservatives say Biden did not legitimately win. The opposite view is held by 62% of independents, 71% of moderates and 93% of both Democrats and liberals.