The gravitational pull of the farm was too strong for the former NASA astronaut to ignore.
KFSN
By Dale Yurong 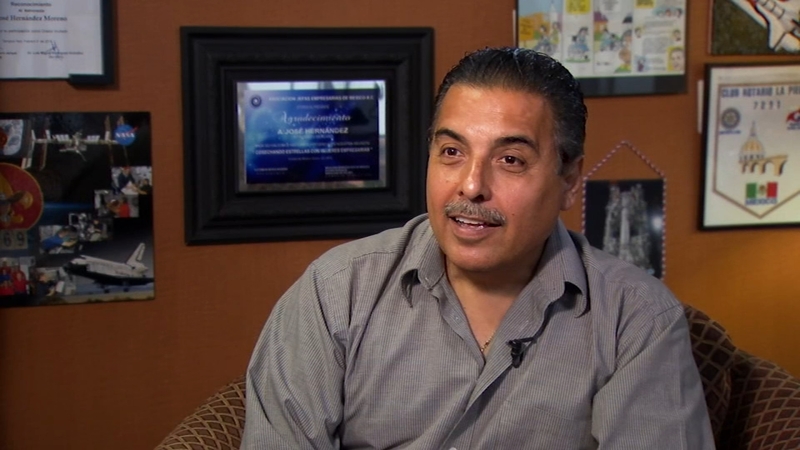 Valley winemaker brings out of this world experience to job

FRESNO, Calif. -- Former NASA astronaut Jose Hernandez grew up working the fields alongside his family all over California.

Hernandez used to pick grapes when he was a kid.

He has now resumed working in a vineyard.

And just like everything else in his life, the sky's the limit for Jose's latest venture.

RELATED: Farmworker turned astronaut Jose Hernandez urges kids not to give up

Perhaps Hernandez' latest mission was written in the stars.

The gravitational pull of the farm was too strong for the former NASA astronaut to ignore.

"It kind of comes full circle now," he says.

The grapes, which are hand-picked from upright head-trained vines, used to be sold to Korbel when Hernandez first bought the property four years ago.

But now he's crushing the crop and selling the wine under the Tierra Luna Cellars label. The name translates to 'earth-moon'.

"This is the first year where we're actually bottling the wine," he says.

Jose Hernandez now has a 20-acre vineyard outside of Lodi, California.

He calls farm work therapeutic though he probably didn't feel that way when he was a kid.

Jose's 84-year-old father Salvador is still with him every step of the way.

Spending more time with his father makes it special. And they're not working for someone else.

"This time is very different. I feel very happy to be working on our own crops," says Salvador Hernandez.

Dad has been able to teach Jose how to produce a good crop.

Now they can't wait to share the wine they've produced.

"These first bottles are the special ones because you'll never have a first set of bottles," says Jose.

Jose's grapes were crushed with a crop from Lake County and made into a Sauvignon Blanc.

He loves to work in his vineyard.

As a kid, when Jose was dirty and sweaty after working the fields, his dad would tell him that's your future - unless you get an education.

Hernandez set his sights on space.

"I took him seriously you know. When he was about ten years old, when he told me he wanted to become an astronaut I told him yes, why not," says Salvador.

In 2009, Jose Hernandez lifted off into space aboard the Space Shuttle Discovery. The 14-day mission included a stop at the International Space Station.

One of the reasons why he left NASA and returned to Stockton was so he and his wife and especially the kids could spend more time with their grandparents and relatives.

"To me it's such precious moments at his stage of his life that now I'm not going to regret and say I should have spent more time with him during his last years because I'm doing it," says Jose.

The 58-year-old elder Hernandez also works as an engineering consultant and motivational speaker.

Reinventing himself is something Jose has always done.

He was rejected 11 times by NASA before finally being accepted.

"It's probably a pretty good story to tell over a glass of wine," he now says.