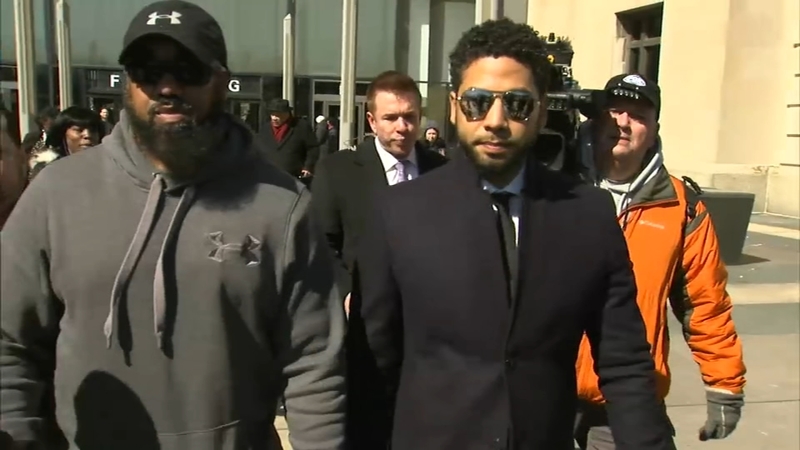 CHICAGO -- A day after a six-count grand jury indictment was handed up against former "Empire" actor Jussie Smollett for allegedly lying to authorities, Cook County State's Attorney Kim Foxx spoke about the review.

Smollett claimed he had been attacked in by two men who yelled racist and homophobic slurs at him. Police said Smollett staged the attack on himself because he was unhappy with his salary on the show "Empire."

All 16 counts of felony disorderly conduct were dropped last February by Foxx's office.

Special Prosecutor Dan Webb was then appointed in August to examine that decision, resulting in the indictment against Smollett Tuesday. Foxx spoke about the indictment before an event downtown.

"We are continuing to avail ourselves to a review of how this case was handled," Foxx said. "As I said from the very beginning, we welcome the non-political review and that is ongoing."

Foxxs' supporters believe the timing of these new charges are suspect, asking why now? Fox says, it's all politics.

"We have an election that's coming up in the next five weeks," Foxx said. "I certainly would hope that the decision made in this case was based on the facts, the evidence, and the law."

Smollett's attorney echoing that sentiment, saying in a statement in part, "After more than five months of investigation, the Office of the Special Prosecutor has not found any evidence of wrongdoing whatsoever related to the dismissal of the charges against Mr. Smollett. Rather, the charges were appropriately dismissed the first time because they were not supported by the evidence. The attempt to re-prosecute Mr. Smollett one year later on the eve of the Cook County State's Attorney election is clearly all about politics not justice."

Foxx's opponent in the March 17 primary, Bill Conway, has been hammering the airways for weeks with an ad criticizing Foxx for giving Smollett preferential treatment compared to his client, charged with a similar crime.

Another opponent, Donna More, issued a statement saying, "This can no longer be considered just an error in judgment or a disappointing lack of transparency. There may be significant wrongdoing on the part of the State's Attorney."

Webb said his investigation was into whether Smollett should be further prosecuted for alleged false police reports, and whether any person or office involved in the investigation engaged in any wrongdoing, including the Cook County State's Attorney's Office.

He said he "disagrees with the state's attorney's" original decision to drop the charges against Smollett after he was initially indicted, said he found the evidence "was strong" and that the state's attorney provided no proof there was no evidence that would have justified dropping the case against the actor, or previous similar case history.

Webb said he has not reached a conclusion on whether Foxx or anyone in her office committed any wrongdoing, but added that part of his investigation is ongoing.

Foxx's campaign also raised questions about the timing of the charges in a statement Tuesday, also calling it James Comey-like, saying it was "something voters in the era of Donald Trump should consider offensive."

Former Chicago Mayor Rahm Emanuel, who was highly critical of Foxx's decision to drop charges against Smollett, would only say, "You don't need me to comment or interpret it. It speaks for itself."

The city of Chicago also released a statement, saying, "We look forward to reviewing the indictment and, as we have said previously, the City stands by our original complaint seeking to recover costs for Mr. Smollett's false statements. We again thank the Chicago Police Department detectives for their hard work on the original investigation."

Smollett is scheduled to appear in court for an arraignment on February 24.