The most brutal rose ceremony dumping ever; Blake Moynes joins 'The Bachelorette' 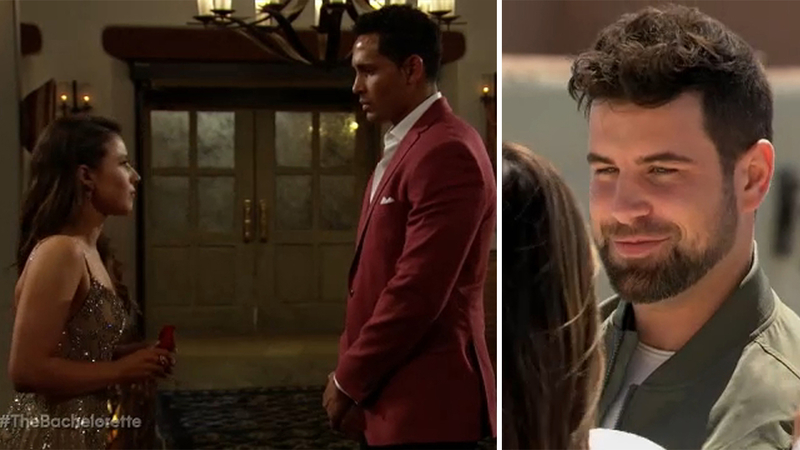 NEW YORK -- This week began with the men of the house vs. Thomas on "The Bachelorette." They are on a campaign to get rid of him after he said one of his thoughts in coming on the show was that he could be the next "Bachelor." Quartney tried to tell Thomas that he's digging the hole deeper and deeper with dishonesty. The right reasons police are out in force.

Group Date
"Be daring in the name of love," the group date card read. Katie told the guys that it meant they needed to show off their sense of humor. Kaitlyn and Tayshia told the guys that they would be taken on an emotional rollercoaster on Katie's Truth or Dare game.

He got his 🍑 out in Tamaya 😅 #TheBachelorette pic.twitter.com/imWR8iFYAQ

The challenges included six mystery domes of food. Underneath were piles of carbs! There were Twinkies, alfredo, and an entire chocolate cake. The guys had to whisper sweet nothings into a giant ear connected to a speaker that Katie and the other women could listen in on. Greg tried to get sexy talking about the 50 states, it was a bit awkward. There was also a waxing station where the guys got their butts waxed. In the end, they had a pepper challenge where they had to eat two habaneros. Greg looked like he was going to die after eating the peppers. He told Katie he loved her as he pretended to propose with a giant ring as the peppers burned fire down inside his intestines.

During the evening portion of the date, Andrew S. brought Katie some Taco Bell since he heard she liked it. She was really excited! They had a great conversation about how they want their relationship to go, and he seems so genuine in his feelings for her. Greg and Katie shared where their feelings are at, and for Katie, that meant revealing to him that she's falling for him. That's incredibly soon for a "Bachelorette" to come out with that so soon!

Meantime, the rest of the guys were dredging up the drama with Thomas. Tre wanted to talk to Katie about it but some of the other guys were trying to talk him out of it. Katie had a great date and Andrew S. said that if Tre talks to her about Thomas it's going to ruin everyone's night. Yet, Greg and a few of the other guys thought Tre should talk to her about Thomas. Being the right reasons police never ends well. It throws that person into the friend zone because they aren't focusing on progressing their own relationship with "The Bachelorette."

Tre did tell Katie how he felt about Thomas and that Thomas told the other guys that he came on the show with the intention of becoming the next "Bachelor." Katie said she felt devastated by that news and she thanked Tre for telling her. Katie told the producers that she could not ignore what Tre told her and she feels like Thomas' relationship with her was just a lie, and she started crying. Andrew told Tre he disagreed with how it was handled and he thinks that Katie would figure it out on her own. In the end, Katie decided to give the date rose to Tre. It was pretty shocking, that strategy usually backfires. Andrew S. said that he is upset that the other men are having such an impact on each others' relationships.

The moment you've all been waiting for is here tonight! #TheBachelorette pic.twitter.com/j6GELWq4le

Katie was emotionally drained and was worrying more and more about the men not being there for her. Tayshia stopped by and told her that someone from her past was very passionate about the fact that he could be an amazing match for Katie. Tayshia said she thinks he's a nice and honest guy who would definitely propose at the end. He didn't start off in the beginning of the show because he wasn't sure if he wanted to go through the whole show again and living in the house, I mean, can you blame the guy? Tayshia wouldn't tell her who it was, she wanted her to meet him for herself and make her own judgment.

Blake Moynes Asks Katie for a Shot at Her Heart
We saw his shoes, his hands, and a figure leaving his hotel room. Tayshia hugged Katie and told her to give him a chance. Katie was worried that bringing in another man could ruin the relationships she had already started. Katie walked out to meet the mystery man, the camera panned up, and was Blake Moynes! He gave her a hug and then apologized for throwing a wrench into her situation. But then, he rattled off the million reasons he wanted to be there and why he just wants to be with her. He said all of the right things. Katie said that they had chatted through DMs before and she finds him very handsome. She never pursued anything because she was about to be on the show. "Seeing you is like a dream or a nightmare," Katie said. She also told him that she was concerned that she would be the third "Bachelorette" he's dated. He told her that he thinks the risk of him looking like a complete idiot in this situation is very high, but the reward could be so much greater than that. "I would what if, and regret forever if I didn't do this," Blake said to Katie. She told him that she is having some deep connections with a few of the men but to be honest she feels like there could "maybe" be something there with him too! "I'll take the maybe," Blake said. "I promise you, that if it came down to the end and we connected the way that I think that we might, we would be engaged at the end of this," he said. "I didn't come here to disappoint, and I wouldn't do that to you, that's just not me," Katie told him that he's a troublemaker and she just needed to take it all in.

Tayshia and Kaitlyn Advise Katie
Katie told them that she needs to focus on being present with the current men there before dealing with the fact that Blake showed up. She's trying to decide whether or not to keep Thomas around. Katie said she was picturing hometowns with Thomas, but something is off now. She started to cry because she had such high hopes for him. She told Kaitlyn and Tayshia that there's nothing Thomas can say that will change her mind. Or is there?

Thomas Goes to Talk to Katie
He decided the best way to handle the situation was just to talk to Katie before the cocktail party. Thomas told Katie that the other guys are just demonizing him and making it awful for him in the house, but he just wants to fight for her. He said he'll put up with all of that to be with her. He said that he went on the show open for anything and one of the possibilities was that you could end up the next "Bachelor" or that you could fall in love. He said he would sign something saying he'd never be "The Bachelor" if it meant he could be with her. Katie said that he says everything that's perfect, just like she wants to hear it, and to her, that is setting off alarms. He told her that when he wakes up, she's what he thinks about. Katie said that it's just "so much" and it's "devastating" for her. He begged her to give him another chance, and Katie said she would think about it and see him at the rose ceremony.

Drama Before Cocktail Party
Thomas walked back in and told the men that he spoke to Katie about his intentions. Hunter and Tre were outraged and then Andrew S. started to tell them, I told you so. He said there was a ripple effect and now it's ruined the mood in the house and it accomplished nothing because Thomas is still there. Aaron said well should we have done nothing? Andrew said, yep. They started to yell at each other as Katie walked into the room.

Cocktail Party
Katie announced that she had taken some time to talk to Thomas and she apologized to Thomas for the fact that he felt ostracized by the house. Brendan told Katie that he likes her a lot and he loved that she is a strong woman and that he will support her in any way he can. He seems like a good guy. She heard a lot of the same from the other men as well. Katie was a bit upset that no one wanted to talk to her, they only wanted to talk about Thomas. The drama is getting in the way of her getting to the men and who they are. Our single dad Michael was a voice of reason to the other guys and got them to calm down. He told Katie that he could picture a life with her outside of the show. "The person you are is exactly the person I have been seeking," he said.

Rose Ceremony
Before Katie could get started with handing out roses, Thomas made an open apology to Katie and the men about his intentions.
1) Connor B (Group Date last week)
2) Michael (one-on-one date last week)
3) Tre (this week's group date)
4) Hunter
5) Greg
6) Justin
7) Brendan

Katie then called Thomas' name and told him that she has learned that he is "selfish, unkind, and liar!" OMG! The guys' jaws were on the floor. "Your 'Bachelor' audition ends tonight, so get out," Katie said to Thomas. Wow, I have never seen such a public rose ceremony breakup in my whole life! He said nothing to her, looked at her in disbelief, and walked out. It was brutal!

Katie Invites Blake to Stay
Then, instead of saying that there was one rose left, Tayshia told the men if they hadn't received a rose, it was time to say goodbye. She didn't hand out her 15th rose! Katie left the rose ceremony and knocked on Blake's door. He answered it in boxer shorts! She said, "Um, are you naked, go get a robe on!" He apologized and said he wasn't expecting her and ran off for a robe. Katie was dying of laughter in the hallway. She yelled, "I can come back another time!" He yelled back, "NO!" He came running to the door in a hoodie and pants and she asked him what he was doing in there. He said he didn't own a robe and he needed to put a mint in his mouth! Ha! She asked him to stay and told him to pack up because he's moving into the house with the rest of the guys tomorrow. His mind was blown! Then, he realized he was locked out of his room.

Coming Up
Next week, Katie and Andrew have a great date, Greg and Katie's relationship continues to grow, and things heat up with Blake. He's got a huge target on his back as the new guy! Hunter gets too rough on a group date and knocks a guy down. We'll have to wait and see what happens!