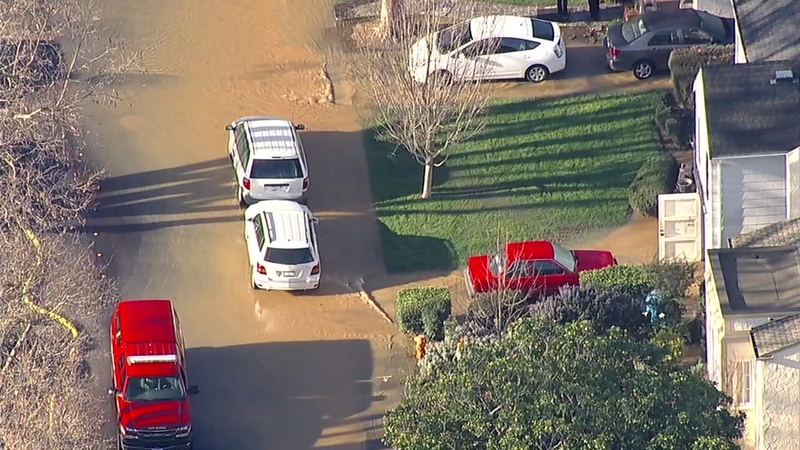 SAN MATEO, Calif. (KGO) -- It was a 12-inch cast iron pipe, installed in 1955, that broke and flooded a church and school in San Mateo early Thursday morning. Then, as drains got clogged from mud and debris, the flood waters found their way to backyards and a basement on Aragon Blvd.

"We just built our dream home here," said homeowner Assai, who declined to give her last name. "Nine months ago we moved in, and we lost absolutely everything."

She's referring to her 1800 square foot basement, a rarity in this area. Assai said within 40 minutes, the water was five feet two inches high. She was only able to salvage her wedding photo album, her kids' photos and their passports.

The water main break did substantial damage at St. Matthew's Catholic Church and school. The school's five-year-old gymnasium may have suffered the greatest damage.

"It's so pretty," said student Alden Parsons. "We love it. It's beautiful, and it's just so sad because we just re-did it, and now the floor's probably all damaged. It's just super sad."

Beckie Caldwell, the director of school affairs at St. Matthew's, said the damage is being assessed right after clean-up is completed. A climbing wall in the gym was being dismantled due to damage.

Crews from two major restoration firms have been working all day since the flooding began at 6:30 a.m. to pump out water from the school and to clear mud and clogged drains.

California Water Service has the job of pumping out the large hole created by the broken main before removing and replacing it.

"We'll look at this main," said Ross Moilan, Cal Water district manager, "and we'll determine if age, soil condition material led to this failure and if so, we'll take a look at replacing that main."

Classes for 600 students were canceled Thursday due to the flooding. Ms. Caldwell told ABC7 News that classes will be canceled again on Friday.