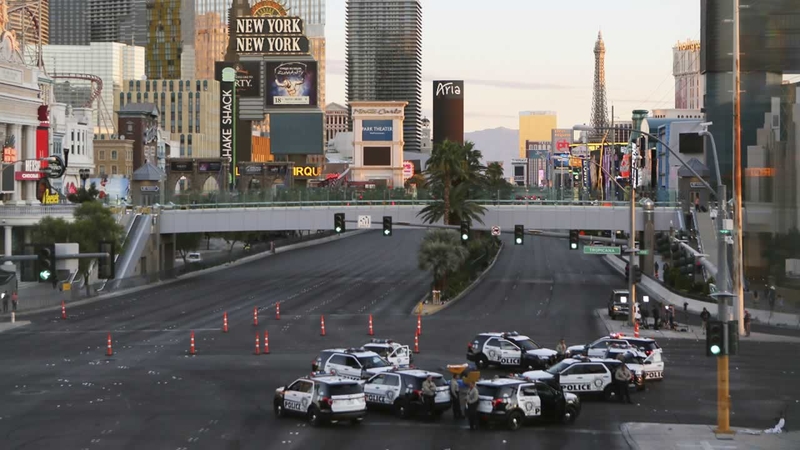 LAS VEGAS -- The FBI says there is no apparent link to international terror organizations after a mass shooting at a country music festival in Las Vegas -- what is now considered the deadliest mass shooting in U.S. history.

The gunman on the 32nd floor of a Las Vegas hotel-casino rained heavy fire down on a crowd of over 22,000 at an outdoor country music festival, turning the expanse into a killing ground from which there was little escape. At least 59 people died.

In addition to the dead, at least 527 people were injured, authorities said.

Concertgoers screamed, ran in terror and scrambled for cover Sunday night in an attack that at first sounded like firecrackers to many but turned out to be dozens of bullets in rapid-fire bursts, perhaps from a fully automatic weapon.

SWAT teams using explosives stormed the gunman's hotel room in the sleek, gold-colored glass skyscraper and found he had killed himself, authorities said.


The gunman , identified as Stephen Craig Paddock, a 64-year-old retiree from Mesquite, Nevada, had as many as 10 guns with him, including rifles, they said.

Asked about the motive for the attack, Sheriff Joseph Lombardo said: "I can't get into the mind of a psychopath at this point."

RELATED: How to help Las Vegas

The sheriff said a check of federal and state databases showed Paddock was not on law enforcement authorities' radar before the bloodbath.

Aaron Rouse, the FBI agent in charge in Las Vegas, said investigators saw no immediate evidence connecting the attack to an international terror organization, despite a claim of responsibility from the Islamic State group.

Country music star Jason Aldean was performing at the Route 91 Harvest Festival when the gunman in the 44-floor Mandalay Bay Hotel and Casino apparently used a hammer-like device to smash out windows in his room and opened fire, the muzzle flashes visible in the dark, authorities said.

The crowd, funneled tightly into a wide-open space, had little cover and no easy way to escape. Victims fell to the ground while others fled in panic. Some hid behind concession stands, while others crawled under parked cars.

Kodiak Yazzie, 36, said the music stopped briefly after the first shots, then started up again before a second round of pops sent the performers ducking for cover and fleeing the stage.

Monique Dumas, of British Columbia, Canada, said she was six rows from the stage when she heard what she thought was a bottle breaking, then a popping that sounded to her like fireworks.

Couples held hands as they ran through the dirt lot. Faces were etched with shock and confusion, and people wept and screamed. Some were bloodied, and some were carried out by fellow concertgoers. Dozens of ambulances took away the wounded, while some people loaded victims into their cars and drove them to the hospital.

RELATED: What we know about the Las Vegas gunman

Stephen Paddock, 64, is seen in an undated photo.

The shooter appeared to fire unhindered for more than 10 minutes as Las Vegas police frantically tried to locate the man in one of the Mandalay Bay hotel towers, according to radio traffic. For several minutes, officers could not tell whether the fire was coming from Mandalay Bay or the neighboring Luxor hotel.

Investigators gave few details on the weapons used, but police during the attack reported over the radio that it was fully automatic fire.

In an address to the country, President Donald Trump called the attack "an act of pure evil" and added: "In moments of tragedy and horror, America comes together as one. And it always has." He ordered flags flown at half-staff.

Hospital emergency rooms were jammed with the wounded. Rep. Ruben Kihuen, a Democrat whose congressional district includes a portion of Las Vegas, visited a hospital and said: "Literally, every single bed was being used, every single hallway was being used. Every single person there was trying to save a life."

Las Vegas authorities put out a call for blood donations and set up a hotline to report missing people and speed the identification of the dead and wounded. They also opened a "family reunification center" for people to find loved ones.

"It's a devastating time," the sheriff said.

The sheriff said authorities believe it was a "lone wolf" attack but want to talk to Paddock's roommate, a woman Lombardo said was out of the country at the time of the attack.

Paddock's brother, Eric Paddock, who lives in Florida, told the Orlando Sentinel: "We are completely dumbfounded. We can't understand what happened."

Mayor Carolyn Goodman said the attack was the work of a "crazed lunatic full of hate."

In its claim of responsibility, the Islamic State group said the gunman was "a soldier" who had converted to Islam months ago. But it provided no evidence, and the extremist organization has been known to make unsubstantiated claims of responsibility for attacks around the word.

The Islamic State group also said it was responsible for a June attack on a Manila casino and shopping complex where 37 died, mostly from smoke inhalation - a claim rejected by authorities, who said the lone attacker was a heavily indebted Filipino gambling addict.

On Monday, the U.S. Homeland Security Department said there was no "specific credible threat" involving other public venues in the U.S.

Attorney General Jeff Sessions offered the support of the FBI and other federal agencies but noted that the investigation is being led by the sheriff. That was seen as another possible sign the shooting was not thought to be an act of international terrorism.

Interstate 15 was briefly closed after the attack, and flights at McCarran International Airport were suspended for a while.

Nearly every inch of the Las Vegas Strip is under video surveillance, much of it set up by the casinos to monitor their properties. That could yield a wealth of material for investigators as they try to piece together the attack.

Hours after the shooting, Aldean posted on Instagram that he and his crew were safe and that the shooting was "beyond horrific."
VIDEO: Woman describes Vegas shooting chaos on GMA
EMBED More News Videos

"It hurts my heart that this would happen to anyone who was just coming out to enjoy what should have been a fun night," the country star said.

Before Sunday, the deadliest mass shooting in modern U.S. history took place in June 2016, when a gunman who professed support for Muslim extremist groups opened fire at a gay nightclub in Orlando, Florida, killing 49 people.

Sunday's shooting came more than four months after a suicide bombing at an Ariana Grande concert in Manchester, England, that killed 22 people. Almost 90 people were killed by gunmen inspired by Islamic State at the Bataclan concert hall in Paris during a performance by Eagles of Death Metal in 2015.

On Monday afternoon, Allegiant Airlines offered free flights for family members of those who were killed or injured in the deadly shooting.

Pray for Las Vegas. Thank you to all our first responders out there now.