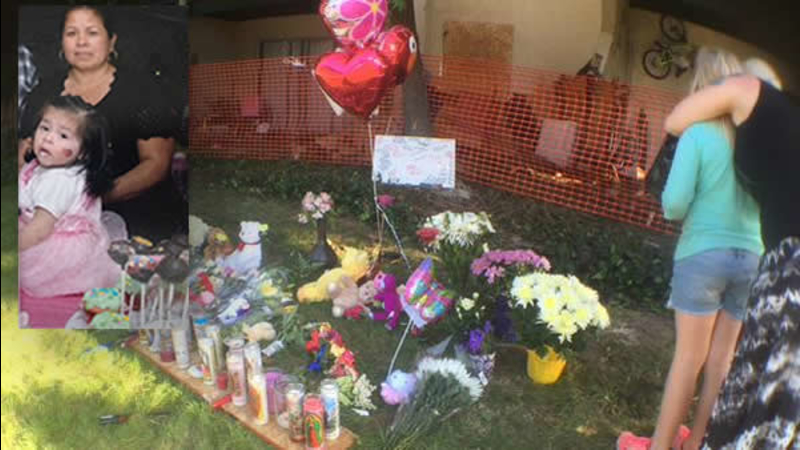 LIVERMORE, Calif. (KGO) -- The driver involved in an alleged DUI crash that took the life of a woman and her baby when his out of control Corvette crashed into an apartment in Livermore Saturday evening was at a wine festival prior to the crash and has already been released on bail.

Officials believe Brian Jones, 35, had been drinking at the Livermore Wine Country Festival prior to the crash, which occurred at roughly 6:50 p.m. on Murrieta Boulevard.

Preliminary tests revealed Jones was driving with a 0.13 percent blood-alcohol content or higher.

Jones was arrested on suspicion of gross vehicular manslaughter, while intoxicated and driving under the influence causing injury.

The victims died at the scene and have been identified as Esperanza Morales, 40, and her 14-month old baby Juli Morales.

On Sunday, family and friends left their condolences at a growing memorial.

Police say Jones was under the influence and speeding when his car, leapt off Murrieta Boulevard, ripped through a power supply box, sideswiped two trees and rammed into a back patio where a first communion party was being held.

Two boys, ages 6 and 7, were also taken to a hospital in stable condition after the crash. "There was a couple stitches in the arm and the other kid had a couple scratches," Santiago Hernandez said.

Hernandez was at the party and says the mother and baby were from Oxaja, Mexico but lived in Monterey.

After the accident, he rushed over to help. "We tried to do the best we can and unfortunately we cannot do much," Hernandez said.

Neighbors and strangers offered tears, prayers and tokens of love on Sunday. Some clung to their children. "I have a little one. I have my wife and I have an 18-month-old son too, so it's pretty intense," Dustin Riker said.

"It just makes me think about my family and how in the blink of an eye your whole life has changed," Patric Rogers said.

Ryan Male felt it important for his son to see the destruction. "It's a good lesson for my son here to know that drinking and driving, they just never go together," he said.

The mother and baby are survived by a father and 10-year-old son.

Click here to make a donation to help the family.

Anyone who witnessed the crash or has additional information about the events that led up to the fatal incident is asked to contact the Livermore Police Department at (925) 371-4777.

Here's a link to the fundraising account. 14-month-old Juli was beyond precious. http://t.co/N32lrl6ycr pic.twitter.com/xg6QT1oUMk

A horrific crash into Livermore pedestrians leaves a 40yo mom and her 14-month baby girl dead. 35yo Brian Jones arrested, suspected of DUI.

Police say Brian Jones of Livermore was speeding down Murrieta Blvd. when he lost control. A 6 & 7 yo boy also taken to hospital.

A growing memorial for the mother & daughter who died after a suspected drunk driver crashed into their backyard pic.twitter.com/CY6Ox04XYq

This woman didn't know the victims, but she was moved to tears and prayed for them as she passed on the sidewalk pic.twitter.com/4eDtW89ETp

A daddy holds tight to his son. Says his heart breaks for the family who suffered in this senseless accident pic.twitter.com/hOevuhWGy6