A man and woman in a suspected stolen vehicle were taken into custody after leaving a path of destruction across South L.A. during an erratic police chase.
KABC 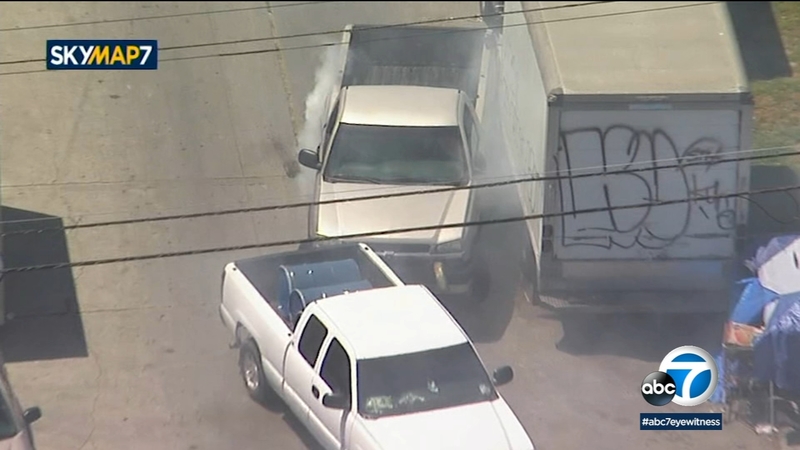 Suspects taken into custody after destructive chase through South LA

SOUTH LOS ANGELES -- A man and woman in a suspected stolen vehicle were taken into custody Friday after leaving a path of destruction across South Los Angeles during an erratic police chase in which multiple vehicles were damaged as the driver topped speeds of 100 mph.

It was not immediately clear when or where the pursuit began, however, Scott Reiff said AIR7 HD began tracking the chase in the Monterey Park area, where the driver of the pickup truck jumped from the 10 Freeway to the 110 Freeway, reaching speeds up to 100 mph.

AIR7 HD was over the chase around 10:30 a.m. as the driver sped along residential streets, blowing through intersections and quickly turning corners.

The male driver, who had a female passenger in the vehicle, circled around the area of S. Central Avenue with at least three Los Angeles police cruiser following closely behind.

A wrong-way driver slammed into an innocent motorist on the 110 Freeway in South Los Angeles during a high-speed chase.

At one point, a sedan driving on a street quickly got out of the way of the pickup truck as the driver came close to the vehicle's back bumper.

About 15 minutes later, the driver appeared to lose control of the truck, swerving in front of a police cruiser on a residential street before regaining control and continuing down the roadway.
EMBED More News Videos

The vehicle, which climbed to speeds of 80 mph, skidded to a stop on S. San Pedro Street - just in time to avoid a spike strip deployed by officers near an intersection.

The dangerous pursuit continued onto the southbound 110 Freeway around 11 a.m.

Shortly after, the driver attempted to exit the freeway, spinning out and striking an exit sign before continuing northbound on the shoulder of the southbound lanes.

The truck narrowly missed several vehicles while driving against oncoming traffic before running head-on into a sedan. The suspect briefly paused before driving off of a freeway on-ramp.

The bizarre scene continued as a pedestrian on a residential street ran up to the vehicle and appeared to hand the passenger a bottle. It was unclear the man's connection to the suspects or what was in the bottle.

A driver who was also in a pickup truck appeared to attempt to block the suspect near E. Florence Avenue. Smoke began to emit from the back of the vehicle as the suspect rammed into the other truck before pushing past and continuing on to Florence.

A driver in a pickup truck appeared to attempt to block a police chase suspect in South Los Angeles on Friday morning.

Moments later, the rear tire on the driver side blew. The suspect continued on residential streets while driving on the rim at slower speeds.

The worn-down rim caught fire near S. Main Street, where the driver and passenger jumped out of the vehicle and were quickly taken into custody as multiple officers descended on the scene just before noon.

A suspected stolen vehicle suspect and a passenger were apprehended after leading authorities on an erratic chase through South Los Angeles on Friday.