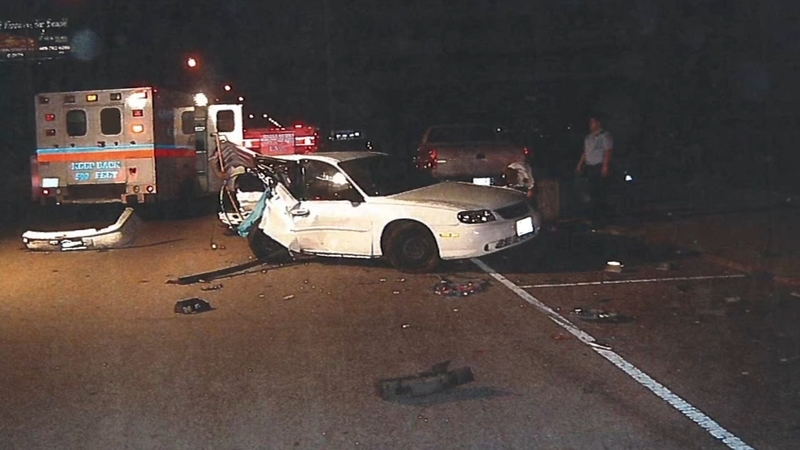 GALVESTON, Texas -- New Year's Eve is one of the biggest drinking days of the year and one of the most dangerous on the roads. Alcohol not only impacts your ability to drive but also how quickly you react.

On Mother's Day 2009, a drunk driver came barreling down the seawall in Galveston, Texas. The aftermath is a scene Lt. Paul Adkins, of the Texas Department of Public Safety, will never forget.

"I can't imagine how a mother would ever be the same," said Adkins.

Lagrace Albert's husband Termaine Albert, her 10-year-old son and 3-year-old godson had just finished a day at the beach.

Lagrace's husband and the two boys were killed right in front of her. The driver, Orvel Speck, was drunk and speeding. Now, Adkins had to prove it.

"We were able to collect evidence that was left following the collision and basically work it backwards," said Lt. Adkins.

Part of that involves the speed at the time of impact and determining how quickly the driver responds. It involves determining a driver's perception and reaction, the time it takes to perceive something and react to it. We naturally have a delayed response even when we're giving driving our full attention and an even slower reaction when drinking.

In the video above, you can see a demonstration.

Using mathematical equations to determine perception and reaction, speed, information from the car's black box and other data investigations were able to figure out what happened.

"We were able to clearly show that (he was) driving almost double the speed limit and being intoxicated. Remove either one of those and I don't think this crash happens," said Lt. Adkins.

That information translates to the courtroom.

"When they do a reconstruction, they distill all that information, the math, and the printouts and the black box and all that stuff, and it tells the story of what happened. And for us as trial attorneys we need to be able to paint a picture for our juries and for our judges," said Xochitl Vandiver-Gaskin, co-counsel on the case for the Galveston County DA's Office.