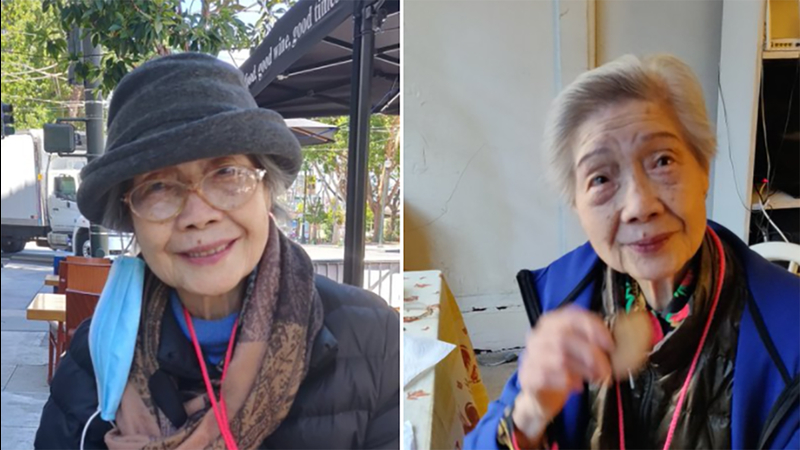 Around 10:15 a.m., officers responded to reports of a stabbing in the 800 block of Post Street, according to San Francisco Police Department.

San Francisco resident Francesco Benvenuti came home to a crime scene on his block and then found out it was because his friend and neighbor, Ahn Taylor, was attacked - stabbed in her torso and through her wrist, according to a family member.

"When I heard this happened, I'm like wow, that's the last person who deserves something like that," exclaimed Francesco, who said Taylor goes by Peng, and often delivers cookies to him and her other friends in the building.

An 89-year-old Asian woman was robbed of her personal sentimental belongings while moving in Oakland, Calif. on Monday.

On Thursday morning, Taylor was out for a walk in her Tenderloin neighborhood, when SFPD says 35-year-old San Francisco resident Daniel Cauich stabbed her with a knife.

Officers say when they arrived, they found the woman suffering from multiple stab wounds.

"We believe the incident was an unprovoked attack and that the stabbing occurred randomly," said SFPD Officer Robert Rueca.

Miranda Benvenuti says, given all the recent attacks on elderly Asian people, she's been concerned about Peng. "She's just the sweetest lady ever, she's so kind-hearted and I'm just beside myself."

Taylor was taken to a local hospital, where officials say she is expected to survive.

I have been in touch with friends and family.

I’m told Peng is out of surgery and in stable condition. She was stabbed through the wrist and in the torso, and hit on the head.

Nobody deserves this, but esp not sweet Peng, who neighbors say delivers cookies to all her friends. pic.twitter.com/UpVXLkgGHl

A family member told ABC7 news reporter Kate Larsen that Taylor is in observation at San Francisco General Hospital and that she is in stable condition. Besides stab wounds, the family member says Taylor was also hit in the head.

The family member said that Taylor is Chinese Vietnamese and the widow of a U.S. war veteran. Her husband passed away two years ago, so she's been living alone in an Upper Tenderloin apartment where she's lived for the past 45 years.

Around 11:45 a.m., police located Cauich on the 1300 block of Clay Street, about seven blocks from the crime scene. He was arrested and booked on the following charges:

Cauich is known to SFPD. In 2016, he was arrested on murder charges in a Mission District stabbing, but the San Francisco Chronicle says court records show a judge dismissed the charges in 2019 for lack of evidence.

Then on May 8 and 18 of this year, he was arrested on burglary-related charges.

"We're talking about someone who's been arrested on several occasions, who was wearing an ankle monitor bracelet, in and out of the system," said Mayor London Breed, who spoke after an event in Chinatown held to bring together the Asian and Black communities and condemn violence.

Mayor Breed: "This could have been avoided had this person been held accountable for the other crimes they committed in the first place."

Kate Larsen: "Who do you think is responsible?"

Mayor Breed: "I think our criminal justice system is responsible. I think that it all plays a role. If you look at the record of what's been happening in this city, in almost every case they have made arrests. So it's up to the district attorney to prosecute, it's also up to the courts to hold people accountable and something is missing here and a ball is getting dropped."

District Attorney Chesa Boudin told Larsen that his office filed a motion to detain Cauich on May 24 and that the courts denied it. Cauich was released on June 7, court records obtained by the Chronicle show.

A GoFundMe page has been set up to help support Peng as she heals from the attack. You can make a donation here.

Today @SFPD responded to a report of a stabbing of a 94 year old Asian woman on Post Street, attended to the victim, and apprehended a suspect in under two hours.

Our thoughts are with the victim, who is expected to survive. I want to thank the officers for their quick action. pic.twitter.com/jfDEJbJXuk

With the rise in attacks against members of our AAPI community, I want to be very clear that this type of violence is unacceptable and has no place in our city. We will not stand by as anyone, especially elderly members of our community, are harmed.