"Don't 'San Francisco' my safe neighborhood": The vote came despite thousands of residents petitioning against the project.
KGO
By Liz Kreutz 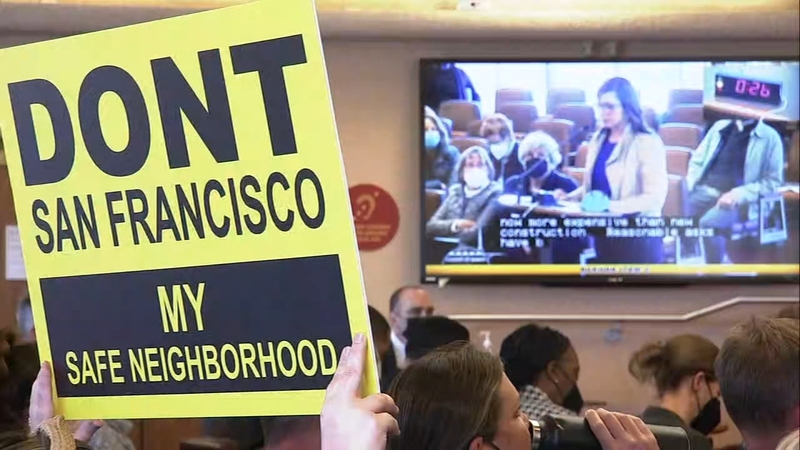 MARIN COUNTY, Calif. (KGO) -- After a heated public meeting on Tuesday, the Marin County Board of Supervisors approved a plan to turn a former nursing home in Greenbrae into permanent supportive housing for the homeless. The vote came despite thousands of residents who signed a petition against the project.

At the Board of Supervisors meeting, dozens of people urged the supervisors to reject the Project Homekey plan for 1251 South Eliseo Drive. Some residents held signs saying, "Don't San Francisco my safe neighborhood."

"There's been no give and take with the community," Christopher Colachis, who lives down the street from the project, told ABC7 News.

Another resident began tearing up while holding photos of her children. "I'm begging you to not change our community," she pleaded with the supervisors.

Greenbrae/Larkspur residents have shown up at the Marin County Board of Supervisors meeting to oppose the new permanent supportive housing proposal. The project would house 50 people. 16 units would be for those w severe mental illness. pic.twitter.com/uzcEq7pcjg

The proposal is part of the state's Project Homekey initiative and Governor Newsom recently approved a $15.5 million grant for the project. It will house up to 50 men and women. Of those, 16 units will be reserved for people with severe mental illness.

Residents against the project are concerned it will make their neighborhood unsafe.

Aubrey Leh, a mom of three from nearby Kentfield, said the community would be more supportive if the project was housing homeless families. She also wants the county to mandate residents at the site get treatment.

Over 3 hours later, public comment about the proposed permanent supportive housing is still going on. Many of the people opposed are going after Supervisor Katie Rice, who supports the project.

“Katie Rice, if you approve this I’m going to start a recall,” one caller just said pic.twitter.com/jnAQH3sap2

"They are offering services, but they're optional," Leh says. "I think a program that combines the two, where treatment is required and provides housing, would be a better model."

Currently, the county says residents will have to work with a case manager, but will not be required to utilize the treatment services. The county says research shows permanent supportive housing is more successful when eligibility is not conditioned on participation in services.

Some in the community do support the project. Chuck Finnie, who lives near the site, stood on Sir Francis Drake on Monday morning with a sign that called out "Nimby Hysteria." Many others spoke during the public comment, and said they feel that people in opposition are stigmatizing people who are homeless.

Some in the community DO support the project. Like Chuck Finnie. He was standing on Sir Francis Drake holding this “Nimby Hysteria” sign.

He says the fears are “preposterous.”

“I’m not scared of folks living in that facility. They’re not going to be of any danger to kids.” pic.twitter.com/jItUr1MFRi

"There's been a lot of people coming out based on fear, not understanding who the people living in the project are," Lauren Krause, who lives in San Anselmo, said.

"Just morally it's the right thing to do," she added.

The public comment lasted more than three hours. Despite the opposition, the county moved forward with the plan. They now have 12 months to get the site up and running.

JUST IN: the Marin County Board of Supervisors has approved the new Project Homeley initiative in Greenbrae.

This, after hearing more than 3 hours of public comment from residents.

Those opposed say they have already started an effort to recall Supervisor Katie Rice. https://t.co/dUBvomwOa8

Leh said the neighborhood is already organizing a petition to recall their Supervisor Katie Rice.

"Katie doesn't seem to represent the majority of people who live here, and that's what she was voted in to do," Leh said.

Christopher Colachis, who moved to Marin County from Oakland because he felt it was safer, said he's so fed up, he's now moving to Florida.

"Listen to your constituents or lose your job. I mean. That's how it is," Colachis said. "Someone is going to get hurt. I guarantee it."

"Katie Rice," he continued, "Call me when it happens, because I'll be there to say I told you so."

Chris Colachis lives down the street from the proposed permanent supportive housing. He says he moved to Marin County from San Francisco solely to be in a safer neighborhood.

Because of this new project, he’s now moving to Florida. He + his wife signed w a contractor this week. pic.twitter.com/Af4J0L2rP1