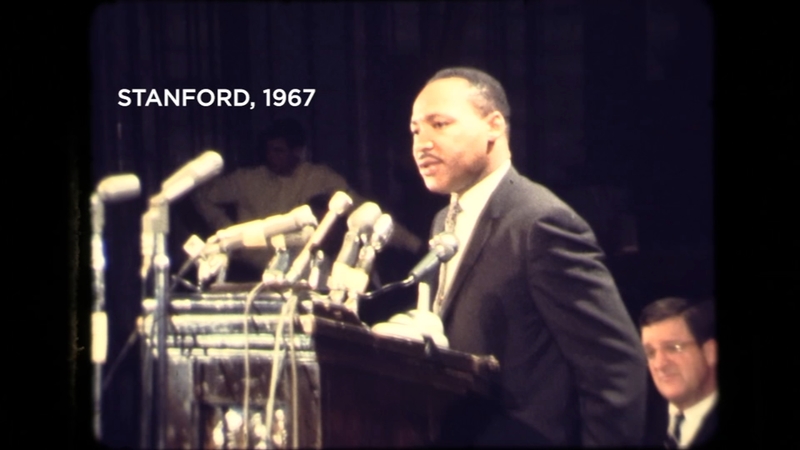 SAN FRANCISCO (KGO) -- In honor of Dr. Martin Luther King Jr. Day, ABC7 took a dive into our archives to explore some of the many visits the civil rights activist paid to the Bay Area. From Berkeley to San Francisco and beyond, Dr. King visited the region several times throughout the 1960s.

"He liked the Bay Area," Dr. Clayborne Carson, Martin Luther King, Jr. Centennial Professor Emeritus at FSI within Stanford University, said. "There was a special affinity for both Martin and Coretta to come to California and I could imagine why. When you think about the areas in the country, it seemed more open for Black people to be treated on an equal basis."

In 1985, Dr. Carson was handpicked by Coretta Scott King to document her late-husband's life in the King Papers Project. Dr. Carson now leads The World House Project at Stanford, which builds on all of the previous work and makes it accessible to the public.

The team at the King Institute is working to provide the most definitive collection of MLK's work and ideas as his legacy is regularly flattened into his famous 'I Have a Dream' speech and his quotes are cherry picked.

"I don't know when was...the first visit," Dr. Carson replied. "Probably 1956. I think in June. That was when he delivered a major speech about the Montgomery bus boycott."

Dr. King's 1956 San Francisco speech was at the NAACP convention.

In 1964, Dr. King spoke at the Republican Party Platform committee hearing at the St. Francis Hotel in San Francisco just days ahead of the Republican National Convention in Daly City.

"It would be a tragic setback not merely for the cause of the Negro, but for democracy and the cause of justice if this fair housing bill is repealed," Dr. King said in ABC7's 1964 film. Dr. King was in town fighting attempts to repeal California's 1963 fair housing act and drumming up support for the civil rights movement. He spoke at the Republican convention days later.

Dr. Bernice A. King, Martin Luther King Jr.'s daughter, discussed her father's legacy and how it should be remembered today.

"He begins to pivot to these international issues," Dr. Carson replied. "The issue of poverty, as well as the issue of racism, and war-- what he calls the three evils in the world."

On April 14, 1967, Dr. King gave another major speech at Stanford University. After the speech, he spoke to reporters, including one from ABC7, and said this, "Our image has been terribly tarnished as a result of this war in Vietnam and I think the people who are protesting it will in the long-run will prove to be the best friends and most patriotic in this country."

On January 14, 1968, Dr. King visited the old Santa Rita Jail in Pleasanton just months before his assassination. He made the following comment to crowd of supporters there, "You know when you go to jail for a righteous cause, you can accept the inconveniences of jail."

Dr. King visited the Bay Area on several other occasions. Unfortunately, ABC7 did not cover every event. We did our best to uncover as many old clips as possible. We encourage you to watch the video above to see glimpses of Dr. King and his messages to us all. Visits as dynamic and inspiring as his, cannot be adequately portrayed in 3 minutes. To learn more about Dr. King's legacy, click here.