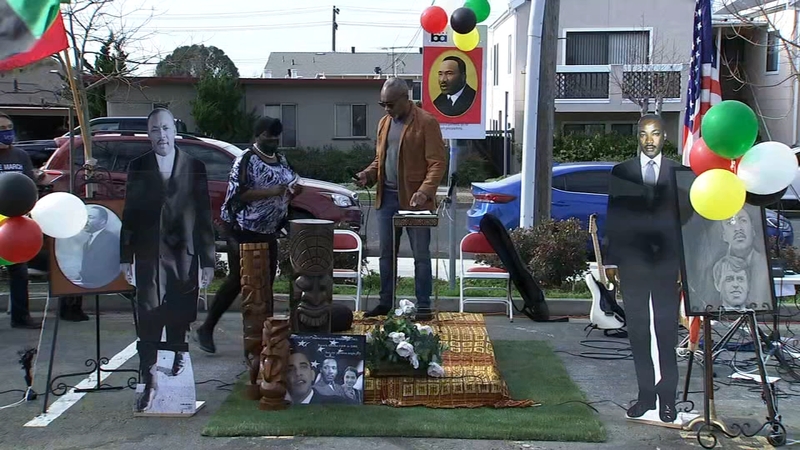 Oakland's Anti-Police Terror Project hosted a car caravan at 12:30 p.m. The theme was "One Struggle, One Fight, One People."

"We're riding for all the lives lost, whether it was someone in the community or someone who works for a law enforcement agency that pulled the trigger," said Cat Brooks, Executive Director Anti Police-Terror Project.

"It's a call to do what King said and declare a war on poverty, not the people," Brooks continued.

In honor of Martin Luther King Jr. Day, we took a dive into our archives to explore some of the visits the civil rights activist paid to the Bay Area.

She says with Oakland in the middle of a violent crime pandemic along with the coronavirus pandemic and an economic pandemic, it was especially important to come together in the safest way possible.

Volunteers planned to hand out food, gift cards and much needed PPE supplies.

Gibson said her grandparents were some of the original organizers of the MLK Jr. Day event, which began 33 years ago as a peaceful protest when the city of El Cerrito declined to recognize the federal holiday. Organizers say it is now the longest, continuously running Martin Luther King Jr. celebration in Northern California.

This year, the event adapted into a car caravan because of the pandemic.

"Our theme this year is that we're keeping the dream alive, embracing our new normals," organizer Patricia Durham explained. "We're embracing our new normal through family, through faith and through community. We're not stopping, so get ready."
The group drove in a caravan down San Pablo Avenue, ending at the San Pablo Plaza Bart station, where there was a program with speeches and live music.

"This is our 33rd year! This is a car parade, we're not getting out of our cars, but we're still celebrating and I love it," Patricia Durham said.

Dozens of community members joined the the festivities, including the El Cerrito police chief, members of the local NAACP and board members with the Japanese American Citizens League, which has been participating in event since it began in 1989.

Here's a look back at some of Martin Luther King Jr.'s most poignant quotes.

"We felt that Black Lives Matter. We felt that we had to support our fellow Americans," said 86-year-old Flora Ninomiya, who was forced to live in a Japanese internment camp as a child during World War II. "And so we are here to support all groups that are marginalized."

"It's important to keep Dr. Martin Luther King Jr's dream alive, to talk about faith and family and community, and how we can bring each other together especially during hard times," said El Cerrito Police Chief Paul Keith.

In the Bay Area, the holiday will wrap up with a series of virtual celebrations that have been happening over the long holiday weekend.

San Francisco's celebrations are going virtual, too, with all indoor events for Monday moving online.

The city's annual MLK march and parade has been canceled.