OAKLAND, Calif. (KGO) -- Family members of a missing disabled Fremont boy are hoping someone can help find him. Police say 5-year-old Hasanni Campbell was last seen in Oakland two days ago. He has cerebral palsy, but family members say he doesn't have leg braces on the outside of his pants.

The search for Hasanni was underway in the Rockridge area for the second day in a row. Wednesday evening, detectives handed flyers out to people in the neighborhood hoping to find someone who saw something. So far, the last person to see Hasanni was his foster father.

Louis Ross took a polygraph test on Wednesday, but the child's foster mother is refusing. He refuses to discuss the outcome, citing the police investigation.

Jennifer Campbell is pregnant and declined a polygraph test, fearing the stress could hurt her unborn baby.

Louis Ross spoke to ABC7 Wednesday night and said a critical description of his son is wrong. He says Hasanni does not wear metal leg braces on the outside of his pants. "So that story being put out there... think about the time that was lost. People could be looking at our son and not realizing it was him because the key discriminator was metal leg braces," said Ross.

Both Hasanni's aunt and Ross are frustrated about not having any time to organize a search for Hasanni.

They say they are too busy cooperating with police -- talking to them for 12 hours the first night, and 17 hours the next.

48 hours after Hasanni went missing the search for him continues. Search teams canvassed the Fremont neighborhood where Hasanni lives with his aunt Jennifer Campbell and her fianc. Dogs searched a park near their house for the little boy's scent but investigators called off the search when they came up empty handed.

Oakland Police Sgt. Ray Blackman told ABC7 Wednesday that they did not have any solid leads or suspects.

Louis Ross told police he left Hasanni alone in his car parked behind the Rockridge neighborhood shoe store where Hasanni's aunt works. He went inside briefly to drop Hasanni's sister off. When he returned to the car Hasanni was gone.

Authorities towed the car. Police and FBI agents have searched the couple's Fremont home and the neighborhood surrounding the shoe store but some family members question the Ross's story.

"It appears somewhat strange and I don't know. So, I don't really want to speculate," said Hassani's godmother Regina Douglas.

The family is pleading for the boy's safe return.

"We're pleading and appealing to their sensibilities, to their conscience, to return this innocent little boy to his family," Douglas told ABC7.

Police say the couple is cooperating with the investigation but they will not say whether they have taken a polygraph test. Investigators plan to search the Rockridge area for a second day in a row hoping for new leads.

"Primarily, this is a missing person's case. But, we would be neglecting in our duties if we discounted that foul play may have occurred," said Ray.

Jennifer Campbell's sister told ABC7 Wednesday that Jennifer is five-months pregnant and devastated by what has happened to her family. The family that is worried and waiting for Hasanni to come home, is now also very concerned about his foster mother's well-being. 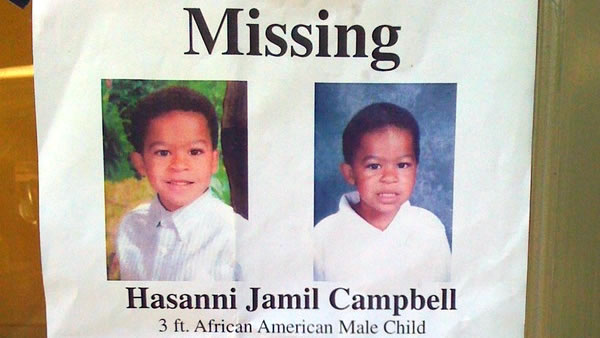