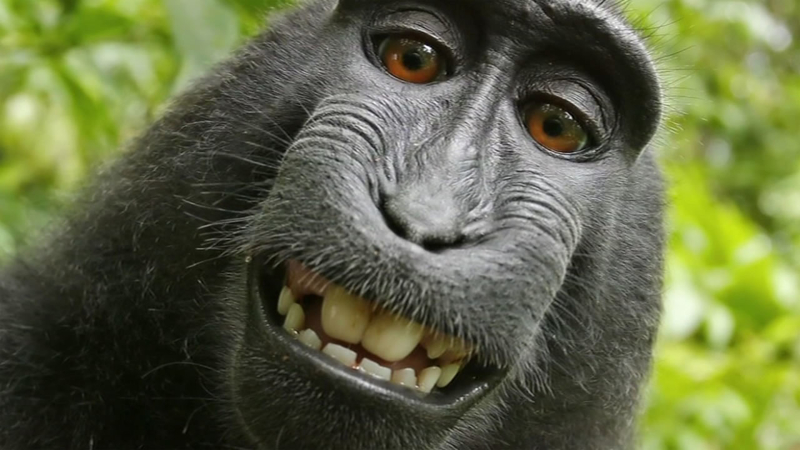 SAN FRANCISCO (KGO) -- There was some serious monkey business Wednesday at the Ninth Circuit Court of Appeals in San Francisco Wednesday.

A monkey is the appellant in a lawsuit against a nature photographer over the rights to a selfie. An appellant is a person making an appeal, except when it's not a person.

"A monkey just walked into a federal court and sued for copyright infringement. It sounds like I'm setting up a punch line, but it really just happened," Andrew Dhuey, attorney for the nature photographer, said.

Well, not really - the monkey, "Naruto," is in Indonesia, which is where the selfie was taken when Naruto picked up photographer David Slater's camera and noticed that pushing the button changed the reflection in the lens.

So similar that animal rights group PETA claims Naruto is the true author of the photo, and is entitled to royalties from Slater's book.

It's a new take on the U.S. copyright act. PETA says it's a broader definition of the word author, much the way courts have broadened other words.

The defense invoked another well-known case about corporations. "They are persons under the law, as the Supreme Court has repeatedly said," the defense said.

No matter who wins, the defendant's lawyers say this case has been tough on their clients. That's why they're asking the court to make PETA pay what could amount to $250,000 in attorney fees.

"We've been going on for almost two years. It's totally unfair," Dhuey said.

PETA says what's really unfair is what humans have done to the monkeys. "They are in danger of extinction. Their numbers have decreased 90 percent over the last 25 years. Their habitat is being encroached on by humans. They're being killed for bush meat," Kerr said.

PETA says they would put the royalties toward conservation efforts.

The defense only wishes they could ask Naruto about all this. "You're not required to be in court, but when you don't show up, it's like Naruto doesn't even care," Dhuey said.