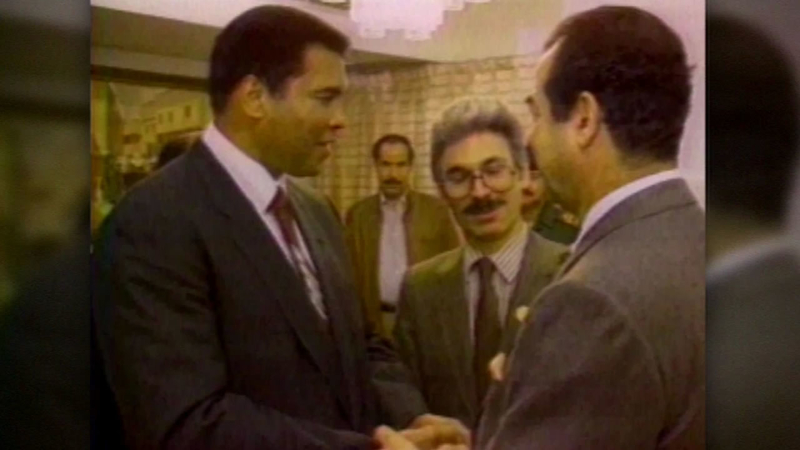 OAKLAND, Calif. (KGO) -- Muhammad Ali was the greatest in the boxing ring and he went on to be a special humanitarian.

There are so many stories about Ali, some seem unreal, like the time he talked a suicidal man off a skyscraper ledge, or the time he helped free hostages in Iraq. His legacy reaches far beyond sports.

Oakland writer Ishmael Reed authored the book "The Complete Mohammad Ali." He says the fighter was able to use his celebrity as a sports star to do work well beyond the ring.


"He did many good works. He was always a soft touch," Ishmael Reed said.

One of his most controversial international missions was his trip to Iraq in 1990. He met with dictator Saddam Hussein and pressed him to release 15 American hostages taken during the first Gulf War. It was a mission that was first criticized, but eventually praised because they were released.

"President Bush would eventually award him the Medal Of Freedom," Ishmael said.

Ali was one of the most famous Muslims in the world and his stardom had real influence.


Bay Area native and Washington Post correspondent Jason Rezaian told CNN that after Ali made a personal appeal to Iran to release him last year. He noticed his prison guards began to treat him differently.

"They started treating me in a better way. I think it brought some doubt to them about the charges against me," Rezaian said.

Rezaian had been held on espionage charges by Iran since 2014. He was released this January.

RELATED: Muhammad Ali, who riveted the world as 'The Greatest,' dies

Athlete, TV star, advocate for peace, there were many dimensions to Ali.

"Gave away money to poor people, so I think he will be remembered for all his works of charity, and his philanthropy," Ishmael said.

A lasting legacy will be his tireless work to help people he never even knew.

RIP @muhammadali, a legend who transcended sport and was a true champion for all. #thegreatest #MuhammadAli pic.twitter.com/vjmXlXaHip

God came for his champion. So long great one. @MuhammadAli #TheGreatest #RIP pic.twitter.com/jhXyqOuabi

"I am the GREATEST!"

Ten quotes from the late Muhammad Ali that will last forever: https://t.co/oSPfXVbaBA pic.twitter.com/0ChsL47DDp

Today we lost a boxer, activists, poet & the conscience of a nation! Meeting him was one of the highlights of my life! #RIPAli

Muhammad Ali's family says his funeral will be held in his hometown of Louisville, KY. https://t.co/90zTWZqybC pic.twitter.com/srvazFWvqr

Rest in peace: Boxing legend #MuhammadAli has died at the age of 74. https://t.co/lezXk0ayro pic.twitter.com/N1g7rrdJSg

#BREAKING: Boxing legend Muhammad Ali has died at the age of 74, according to ABC News. https://t.co/JG4WWK7hlB pic.twitter.com/MQtgBBhOTX

The Greatest is gone ... but a timeless image lives forever.

Muhammad Ali, "The Greatest," has died at the age of 74. pic.twitter.com/xoR8EqRl5d