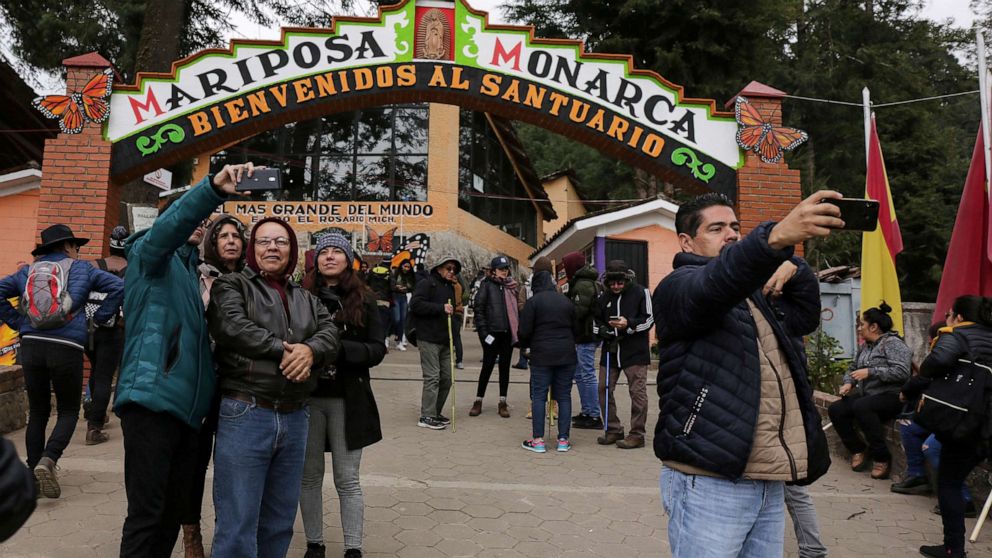 ABCNews
By BILL HUTCHINSON
A murder mystery is unfolding in one of the world's most mysterious wildlife spots after two nature activists who worked at Mexico's El Rosario monarch butterfly sanctuary were discovered slain just days apart, authorities said.

The deaths of Homero Gomez Gonzalez, manager of the butterfly reserve, and Raul Hernandez Romero, a tour guide at the sanctuary, have sent shockwaves across the world of wildlife conservation.

Hernandez Romero's body was discovered on Saturday near the highest point of the mountainous sanctuary, which sits 9,000 feet above sea level in the state of Michoacan, about 130 miles west of Mexico City, according to a statement from the Michoacan state prosecutor's office. Hernandez Romero's family reported him missing on Friday, officials said.

"His body showed multiple bruises and a knife-type wound to the head," according to the statement.

The slaying came about three days after the Hernandez Romero's body was found in a pond near the Central Mexico town of El Soldado, prosecutors said.

An autopsy performed in the presence of State Human Rights Commission representatives determined Gomez Gonzalez died from "mechanical asphyxiation" after suffering head trauma and being submerged in water, according to prosecutors.

Gomez Gonzalez, whose family reported him missing two weeks ago, was one of the region's most prominent conservation activists and a vocal defender of the monarch butterflies. He had launched a campaign against illegal logging that threatens the butterflies nesting grounds, officials said.

Investigators do not suspect Gomez Gonzalez's death was the result of a robbery, saying the victim had 9,090 pesos, or about $500 U.S. dollars, on him when his body was discovered, prosecutors said.

Investigators have yet to say if the homicides of Gomez Gonzalez and Hernandez Romero are connected or linked to their work at the butterfly reserve.

The United Nations Educational, Scientific and Cultural Organization (UNESCO), which placed the El Rosario butterfly sanctuary on its World Heritage List of unique and diverse places in 2008, expressed "deep sadness and profound concern" over the slayings and called for a thorough investigation.

"UNESCO is calling for light to be shed on the extremely disturbing circumstances that marked his [Hernandez Romero's] death, a few days after the as yet unsolved death of Mr. Homero Gomez Gonzalez, also an activist and manager in the same biosphere reserve," UNESCO said in a statement released on Tuesday morning.

"He was an ecologist at heart," Valencia said of her husband, adding that she was baffled that someone who worked to protect life could have his life taken in such a violent manner.

In its statement, UNESCO praised the "courage and self-sacrifice shown by Mr. Hernandez and Mr. Gomez in their struggle for the conservation of the Monarch Butterfly Biosphere Reserve."

Every October, around the Day of the Dead Mexican holiday, millions of monarch butterflies migrate to the butterfly reserve, some from as far away as Canada, to nest in the sanctuary's oyamel fir trees.

In 2018, ABC's "Nightline" was granted rare access to parts of the sanctuary where tourist are restricted and reported that the monarch migration was down 95% since the 1990s. Experts blamed a combination of climate change, illegal logging and an uptick in hurricanes along the migration route as reasons for the dramatic reduction of monarch butterflies that make it to the reserve.

Gomez Gonzalez's son, Homero Gomez Valencia, 19, told the Associated Press that besides fighting to protect the monarch butterflies, his father organized demonstrations to benefit their local community and led farmers in taking over the state of Michoacan capitol building in Morelia to demand development aid.

"He fought for his town, and that fills me with pride," Gomez Valencia said. "A lot of the things we have are due to that struggle, which took many years. He fought against a thousand things. He taught us to be a united people."
Report a correction or typo
Related topics:
abc newsnational
Copyright © 2020 ABC News Internet Ventures.
More Videos
From CNN Newsource affiliates
TOP STORIES
New COVID-19 case with unknown source in Santa Clara County