Mom texts with son for 45 minutes during Orlando attack 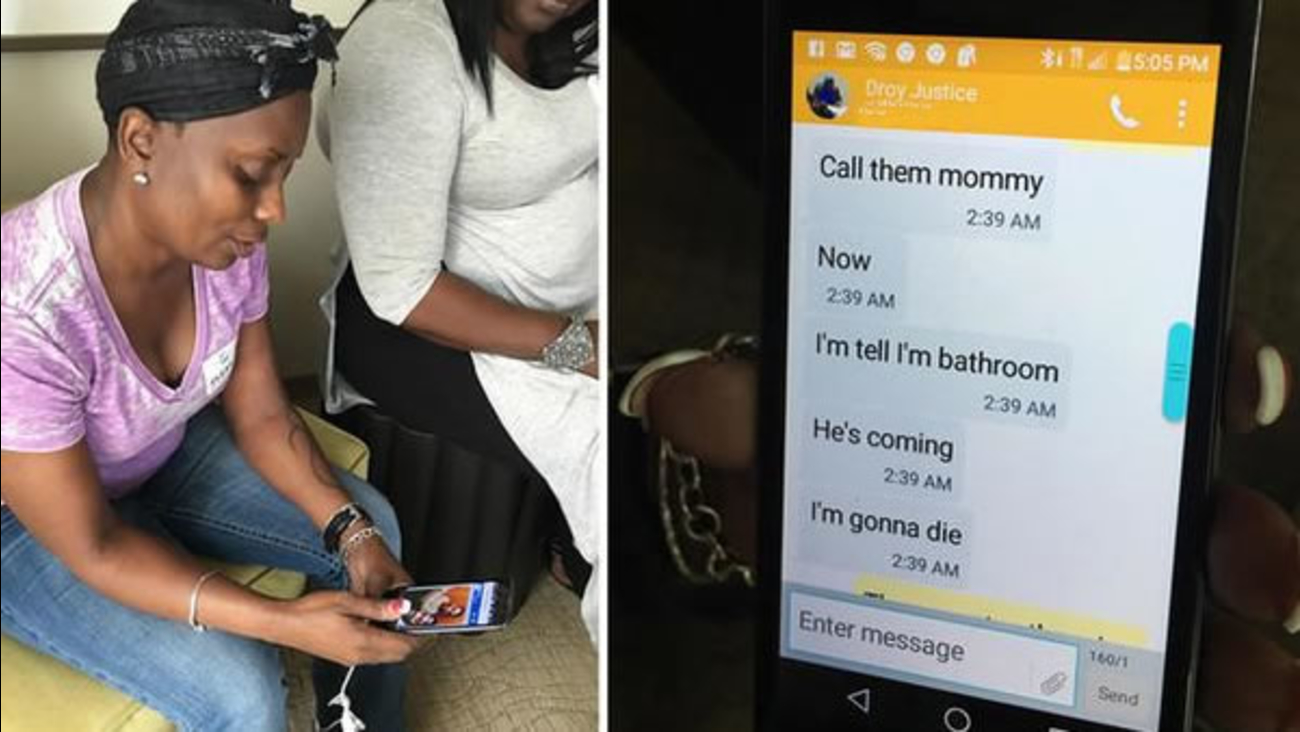 Mina Justice speaks to a reporter discussing texting with her son Eddie Justice who was in a bathroom at Club Pulse, Sunday June, 12, 2016, in Orlando (Courtesy of Mina Justice and AP Photo/Tamara Lush)

ORLANDO, FL -- Mina Justice was sound asleep when she received the first text from her son, Eddie Justice, who was in the gay nightclub when a gunman opened fire in an attack that left 49 patrons dead and more than 50 wounded.

This is the conversation she had over text message with her 30-year-old son:

"In club they shooting."

Alarmed and half awake, she tapped out a response.

Mina Justice shows a text she received from her son Eddie Justice at Pulse nightclub during a fatal shooting in Orlando, Fla., Sunday, June 12, 2016.

Courtesy of Mina Justice via AP

She sent a flurry of texts over the next several minutes.

U still in there

RELATED: Mom fears the worst after texting with son in Orlando nightclub

The 911 dispatcher wanted her to stay on the line. She wondered what kind of danger her son was in. He was normally a homebody who liked to eat and work out. He liked to make everyone laugh. He worked as an accountant and lived in a condo in downtown Orlando.

"Lives in a sky house, like the Jeffersons," she would say. "He lives rich."

She knew he was gay and at a club - and all the complications that might entail. Fear surged through her as she waited for his next message.

He wrote that he was in the bathroom.

Justice asked her son if anyone was hurt and which bathroom he was in.

When he didn't text back, she sent several more messages. Was he with police?

PHOTOS: Landmarks around the world display rainbows in honor of Orlando victims

"Text me please," she wrote.

"No," he wrote four minutes later. "Still here in bathroom. He has us. They need to come get us."

She asked, "Is the man in the bathroom wit u?"

Then, a final text from her son a minute later: "Yes."

More than 15 hours after that text, Justice still hasn't heard from her son. She and a dozen family and friends are at a hotel that has become a staging area for relatives awaiting news. Any news.

"His name has not come up yet and that's scary. It's just ..." she paused and patted her heart. "It's just, I got this feeling. I got a bad feeling."

On Monday, her fears were realized as another name was added to the list of victims: Eddie Jamoldroy Justice.

Click here for the full story on ABC News.