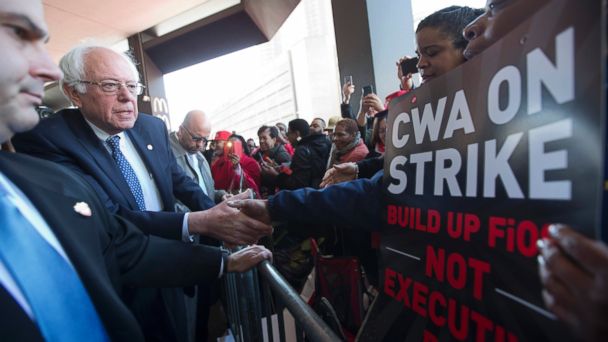 Democratic presidential candidate Bernie Sanders joined nearly 40,000 Verizon workers who are on strike in New York City after the communications company and unions representing the workers failed to reach a labor agreement.

He added, "I know you thought a lot about it and I know your families are gonna pay a price for going out on strike, but you have chosen to stand up for dignity, for justice."

Most of the workers service Verizon's landline phone business and FiOS broadband network, and have been without a contract since August. The unions say Verizon wants to freeze pensions, make layoffs easier and rely more on contract workers, as well as require employees to work out of state for long periods of time.

The two unions who picketed against Verizon -- Communications Workers of America (CWA) and local branches of the International Brotherhood of Electrical Workers (IBEW) -- have endorsed Sanders. (The New York branch of IBEW has endorsed Hillary Clinton, however.)

Sanders made it clear that the endorsements didn't influence his decision to join the strike.

"So on behalf of every worker in America who is facing the same kind of pressure, thank you for what you are doing. We are gonna win this thing," he said.

Lowell McAdam, CEO of Verizon, reacted in a LinkedIn post titled "Feeling The Bern of Reality -- The Facts About Verizon and The 'Moral Economy'" and claimed Sanders is "wrong on the facts."

"I challenge Sen. Sanders to show me a company that's done more to invest in America than Verizon," McAdam wrote today. "Sen. Sanders has also involved himself in our on-going negotiations with labor unions representing some 36,000 communications workers in our wireline business, a bargaining process that has been going on since last June."