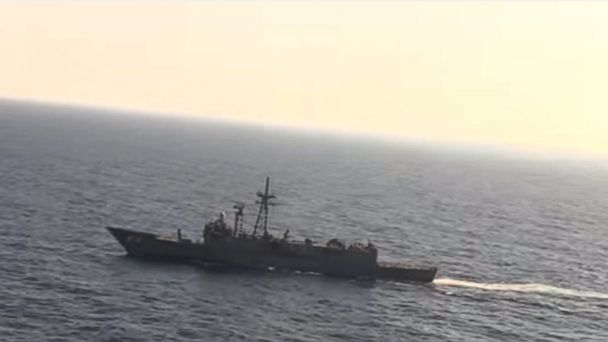 The Egyptian military released footage of the ongoing search for EgyptAir Flight MS804 after it went missing overnight 174 miles off the coast of Egypt.

The video, filmed with a long-range camera aboard a helicopter, shows footage of a military ship searching the Mediterranean Sea Thursday. Planes could also be seen overhead, combing the waters for any sign of the missing plane.

Earlier today, the airline released a statement saying Egypt's Ministry of Civil Aviation had received word that a floating object was found in the Mediterranean Sea near the island of Karpathos. But this statement was later disputed, with EgyptAir Vice President Ahmed Adel saying on CNN that no wreckage was found.

It was not clear what caused the plane to disappear.

The Airbus 320 was en route to Cairo from Paris overnight when it lost contact with the radar tracking system over the Mediterranean Sea at 2:45 a.m. at an altitude of 37,000 feet, according to the airline. Sixty-six people were on board, including 56 passengers, three EgyptAir security personnel and seven crew members, the airline said.

The flight included two infants and one older child, according to EgyptAir. No Americans were on board.