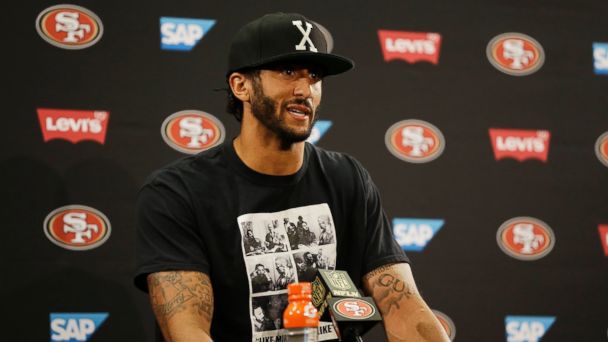 San Francisco 49ers quarterback Colin Kaepernick said today no one has tried to stop him from sitting out the national anthem at NFL games or to keep him from talking about the beliefs that led him to the protest.

"No one's tried to quiet me, and you know, to be honest, it's not something I'm going to be quiet about," he said today during a media availability. "I'm going to speak the truth when I'm asked about it. It's not -- this isn't for look, this isn't for publicity or anything like that. This is for people that don't have the voice. And this is for people that are being oppressed and need to have equal opportunities, you know, to be successful, to provide for their families and not live in poor circumstances."

Kaepernick has drawn a mix of criticism and praise since it was noticed that the backup quarterback did not stand during the national anthem Thursday night during an NFL preseason game against the Green Bay Packers. He said he had not stood for the 49ers' first preseason game, but it hadn't been noticed.

He said he made the decision to sit out the national anthem because he wanted to bring awareness to things going on in the country he feels are unjust, and because he feels the values the American flag is supposed to stand for are not being realized.

"There are a lot of things that are going on that are unjust," he said. "People aren't being held accountable for. And that's something that needs to change. That's something that this country stands for -- freedom, liberty, justice for all. And it's not happening for all right now."

He said he will not stand for the national anthem until he feels those ideals are being realized.

The NFL said Saturday that while it encourages team members to stand for the national anthem, it is not a requirement.
Related topics:
abc newsnational
Copyright © 2021 ABC News Internet Ventures.
More Videos
From CNN Newsource affiliates
TOP STORIES