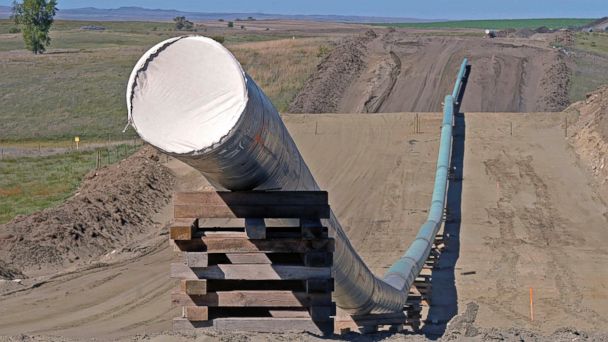 A Native American tribe has filed the first legal challenge to block the nearly finished Dakota Access Pipeline from crossing under a Missouri River reservoir in North Dakota, just hours after the federal government gave the green light for construction to proceed.

The U.S. Army Corps of Engineers on Wednesday granted an easement to the developer of the four-state crude oil project, allowing it to install the final section of the 1,172-mile pipeline. Part of this 1.25-mile section will run under Lake Oahe just upstream of the Standing Rock Sioux Tribe reservation.

"The safety of those located on Corps-managed land remains our top priority, in addition to preventing contaminants from entering the waterway," said U.S. Army Corps of Engineers Omaha District Commander Col. John Henderson in a statement. "We appreciate the proactive efforts of the tribes to help clean the protest site ahead of potential flooding along the river, typical during the runoff season."

While the Army Corps says this area is federally owned land, the Standing Rock Sioux Tribe cites an 1851 treaty that it says designates the land for Native American tribes. The tribe, which claims its members were never meaningfully consulted before construction began, sued in July to block the $3.8 billion Dakota Access Pipeline. That lawsuit is pending, and the Army Corps and the company behind the pipeline argued in court papers that they followed a standard review process.

The Cheyenne River Sioux Tribe, which has joined the Standing Rock Sioux Tribe's lawsuit against the pipeline, filed a motion at the U.S. District Court for the District of Columbia this morning seeking a temporary restraining order "to halt construction and drilling" under and on either side of the land surrounding Lake Oahe. The tribe argues that the pipeline "will desecrate the waters upon which Cheyenne River Sioux tribal members rely for their most important religious practices and therefore substantially burden the free exercise of their religion," according to court documents obtained by ABC News.

The Cheyenne River Sioux Tribe, which is part of the Great Sioux Nation, is requesting that the judge immediately issue a temporary restraining order to stop construction, with a hearing to be held at the court's earliest convenience.

The Cheyenne River Sioux Tribe filed a separate motion seeking a preliminary injunction directing the Army Corps to withdraw the easement issued to the pipeline company Wednesday. The tribe alleges that the easement granted is "entirely unlawful" under the Religious Freedom Restoration Act, according to the court documents.

"The government has granted the easement, and Dakota Access has begun to drill. This court cannot wait until the harm begins to issue equitable relief. When the free exercise of religion is at stake, a threat certain to that right is enough to constitute irreparable harm," the Cheyenne River Sioux Tribe states in court documents. "And in view of the threat to the tribe's and its members' constitutional right, this court may not wait until the oil is slithering under the tribe's sacred waters. The law entitles the tribe to relief as soon as the government acts to threaten their rights."

The Standing Rock Sioux Tribe is expected to file its own legal challenge to the easement by the end of the week.

U.S. District Court Judge James Boasberg has ordered that arguments on the Cheyenne River Sioux Tribe's motion for a TRO will be heard on Monday, during a previously scheduled status hearing in the case.

The granting of the easement follows Tuesday's decision by Robert Speer, the acting secretary of the Army, to terminate the notice of intent to perform an environmental impact statement and to notify Congress of the Army's intent to grant permission for the Oahe crossing. Speer said the decision was made based on a sufficient amount of available information.

If the Dakota Access Pipeline is completed and begins operating, the Standing Rock Sioux Tribe said it will "seek to shut the pipeline operations down."

After receiving the easement to build the pipeline across land on both sides of the reservoir, the Texas-based developer, Energy Transfer Partners, announced it would resume construction immediately. The Dakota Access Pipeline, which would connect oil production areas in North Dakota to an existing crude oil terminal near Patoka, Illinois, is expected to be in service in the second quarter of 2017.

"We plan to begin drilling immediately," a company spokesperson told ABC News in a statement Wednesday night. "The drill under Lake Oahe will take approximately 60 days. It will take an additional 23 days to fill the line to Patoka, Illinois, enabling Dakota Access to be in service in approximately 83 days."

The Standing Rock Sioux Tribe has been at the forefront of massive and prolonged protests that have stalled work on the pipeline for months. The demonstrations have drawn thousands of Native Americans, environmental activists and their allies to the Standing Rock reservation. The protesters, who call themselves water protectors, argue that the pipeline will threaten the reservation's water supply and traverse culturally sacred sites.

Kelcy Warren, the CEO of Energy Transfer Partners, has said that "concerns about the pipeline's impact on local water supply are unfounded" and "multiple archaeological studies conducted with state historic preservation offices found no sacred items along the route."

In the final days of President Barack Obama's administration, Jo-Ellen Darcy, the assistant secretary of the Army for civil works, announced on Dec. 4 that an easement would not be granted for the pipeline to cross under the large reservoir on the Missouri River.

She said at the time of the decision that the Army Corps would engage in additional review and analysis, including a "robust consideration and discussion of alternative locations for the pipeline crossing the Missouri River."

All these steps, Darcy determined, would best be accomplished by the Army Corps' preparing a full environmental impact statement allowing for public input - a process that could take years. She is no longer in the position after the change in administrations.

The move to deny the easement was hailed by the Standing Rock Sioux Tribe and other pipeline opponents as a major victory. But on his second weekday in office, President Donald Trump signed a memorandum aimed at advancing the Dakota Access Pipeline, as well as one directed at the Keystone XL pipeline.