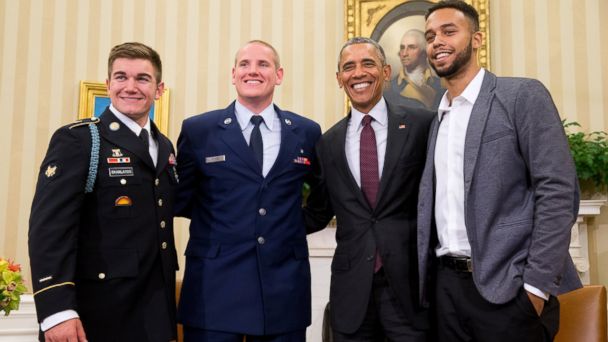 ABCNews
By JOHN PARKINSON
President Obama welcomed the three Americans who thwarted an terrorist attack on a passenger train headed to Paris last month to the Oval Office today, crediting their courage and teamwork for pinning down the gunman and saving countless lives.

"Because of their courage, because of their quick thinking, because of their teamwork, it's fair to say that a lot of people were saved and a real calamity was averted," Obama said. "They represent the very best of America, American character and you know, it's these kinds of young people who make me extraordinarily optimistic and hopeful about our future."

The president said he was pleased to have the opportunity to shake the hands of Airman 1st Class Spencer Stone, Specialist Alek Skarlatos and Anthony Sadler.

"I'm glad to see Spencer. Apparently his hand is in pretty good shape and making real progress," Obama said. "We just want to say thank you to them for not only saving so many lives but also for making America look so good."

Afterwards, the three men reflected on their experience meeting the president, with Stone describing it as "insane."

"There was a moment in time where I just froze right when I walked in and saw [President Obama]," Stone said. "Just looked at him for a second."

"It's pretty surreal," Skarlatos said. "We stood in the Oval Office today. Never thought I'd see the inside of that."

So what was scarier, meeting the president or stopping a terrorist?

The trio heads to the Pentagon where Secretary of Defense Ashton Carter and Vice Chairman of the Joint Chiefs of Staff Adm. James Winnefeld will honor them with an award ceremony this afternoon. At the ceremony, Stone will receive the Airman's Medal and Purple Heart medal, Skarlatos will receive the Soldier's Medal, and Sadler will receive the Department of Defense Medal for Valor.