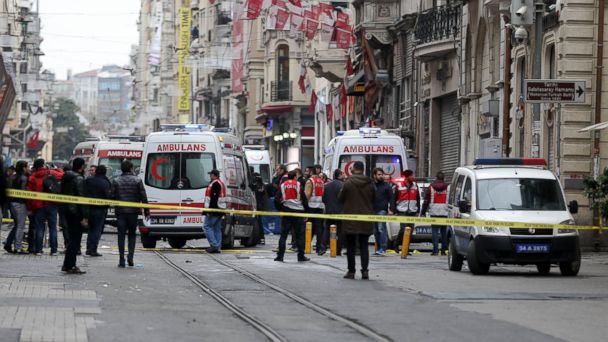 The Turkish Interior Minister said today that the suicide bomber who attacked in Istanbul, Turkey, Saturday -- killing four, including two Americans -- was a militant with ties to ISIS.

But the Istanbul governor said the investigation is still ongoing and it's too early to make such a claim.

According to Interior Minister Efkan Ala, the suspect, is Mehmet ztürk, of Gaziantep province. "Current findings show that the [alleged] terrorist has links to the DAES terror organization," using the Arabic acronym for ISIS.

The identity of ztürk was confirmed by DNA tests taken from his relatives, according to Turkish interior ministry officials.

The attack Saturday was on a main pedestrian shopping street and left four people dead -- including two Americans -- and injured 36 others.

In a statement condemning the attack, NSC Spokesperson Ned Price said Saturday, "Turkey has once again suffered a horrific terrorist attack, and we remain steadfast in our support for our NATO Ally and partner."

"These repeated acts of terrorism in Turkey must come to an end. We are in close touch with Turkish authorities and reaffirm our commitment to work together with Turkey to confront the evil of terrorism," Price said.

Interior Minister Ala said that five suspects were detained in relation to the attack. Turkish interior ministry officials said another suspected ISIS member Savas Yildiz, is also being sought in connection to the attack and that the investigation is ongoing.

The Americans' identities were not released by the U.S., but an Israeli diplomat in Istanbul said the victims had dual Israeli citizenship, according to The Associated Press.

Iranian officials said earlier that an Iranian man was among those killed, the AP reported.