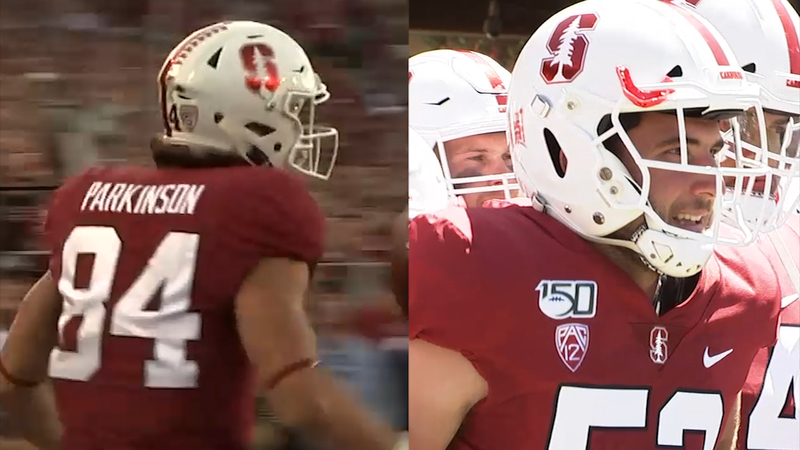 PALO ALTO, Calif. (KGO) -- The 2020 NFL Draft will look a little different due to the coronavirus pandemic, but one thing that probably won't change is fans hearing the names of Stanford players called.

Tight end Colby Parkinson and linebacker Casey Toohill are the names to look out for come draft day.

RELATED: Roger Goodell says NFL draft will go on as scheduled in April despite coronavirus outbreak

Stanford has produced as many top tight end prospects as any over the last decade plus with big names like Zach Ertz, Austin Hooper and Levine Toilolo.

Could Parkinson be next?

Big #84 had 12 touchdowns with more than 11-hundred yards in just three seasons with the Cardinal and that can continue in the NFL.

His mix of size and speed is becoming more and more common at the tight end position.

"Colby Parkinson is just a 6-7 250 pound mismatch," Shaw told ABC7 News. "He's athletic, makes great catches and he's a red zone threat. He, in the right position, has a chance to make an impact right away as a rookie."

Casey Toohill has more of his work cut out for him if he want to immediately make his presence felt in the league.

Toohill received a late invitation to the 2020 NFL Scouting Combine, but he impressed scouts with a 4.6 40 yard dash and a 39 inch vertical jump.

"When he got the invite, I told many scouts to watch out for him," Shaw said. "He was going to do some things that they didn't expect. He ran fast, he jumped high and the interviews were outstanding, because he's a Stanford man obviously."

On the field, Toohill finished with 132 tackles, 60 of which came in his senior year, including the game sealing sack fumble against Northwestern.

Not to mention, he's versatile.

In addition to playing on defense, he played on special teams for Stanford.

His ability to diagnose plays with speed can earn him a spot on a roster where he can develop into a strong linebacker.

We will find out this week if Parkinson and Toohill become the latest Stanford stars to hear their name on draft day.