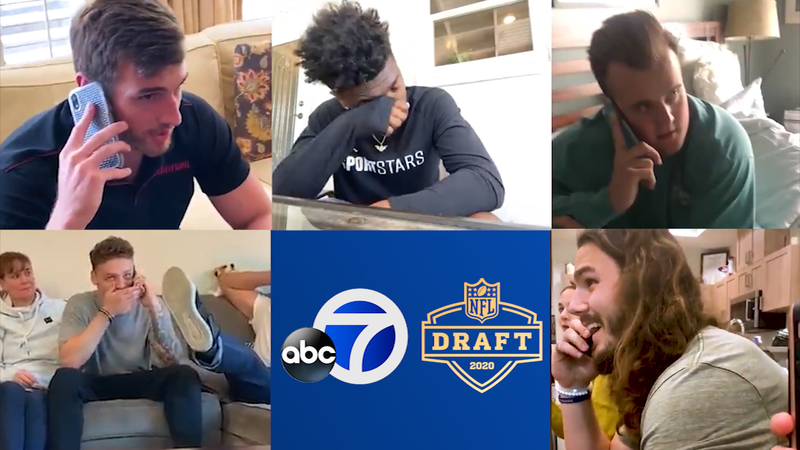 SAN FRANCISCO (KGO) -- The 2020 NFL Draft was nothing short of historic.

With all eyes on their first ever digital draft, the NFL set records for viewership over the weekend with more than 55 million viewers over the three day event.

Those viewers heard the names of five Bay Area prospects called during the course of the draft.

Now it's off to the NFL to bring their football aspirations to life.

Ashtyn Davis, Cal Safety
Ashtyn Davis was one of the top draft prospects for the California Golden Bears. The 6-1 200 pound safety from Santa Cruz is a versatile threat on defense and special teams. Davis originally walked on the Bears football roster after coming to Berkeley to run track at Cal. He competed in both sports and even won the 2017 Pac-12 Championship 110-meter hurdles event. Davis was one of three Cal players to participate in the 2020 NFL Scouting Combine and it paid off. Davis was the first Bay Area college football prospect to be drafted. The New York Jets called his name in the third round with the 68th overall draft pick.

Couldn’t be more excited to be a part of the @nyjets! Let’s get to work! pic.twitter.com/QiF4GTtYJx

Colby Parkinson, Tight End
Colby Parkinson enters the draft in 2020, foregoing his senior year at Stanford. He is also the top prospect to come out of Stanford this year and earned an invitation to the 2020 NFL Scouting Combine. The Cardinal has produced some of the top tight ends in football, including the highest paid TE in NFL history. Parkinson follows right in line with the rest. He was a John Mackey Award semifinalist, the honor that recognizes the nations top tight ends. 87 catches, 1,171 yards and 12 touchdowns were Parkinson's final numbers as a collegiate athlete. Parkinson became the next Stanford TE to join the NFL ranks when the Seattle Seahawks called his name in the fourth round at pick 133.

Jaylinn Hawkins is another dual-threat safety from Cal that has received plenty of national attention. He received an invitation to the 2020 NFL Scouting Combine after becoming a mainstay in the Cal secondary. Originally a wide receiver, Hawkins switched to safety in the spring of 2016 and turned into a ball-hawking defender with 10 interceptions, 17 passes defended and seven breakups. His turnover ability and skills on special teams led the Atlanta Falcons to call Hawkins on day three of the NFL Draft. He was selected with the 134th overall pick in the fourth round.

Evan Weaver, Cal Inside Linebacker
Evan Weaver can easily be considered the heart and soul of the Cal Bears team. Images of the linebacker hoisting the Stanford Axe after defeating their Bay Area rivals will go down in Cal lore. Weaver joined the Bears after being the defensive player of the year in the state of Washington. After switching from defensive end to linebacker, Weaver developed into one of the best defenders in the nation. He was named to first-team AP All-American and All-Pac-12 after leading the country in tackles. Heart alone was a reason to draft him, but his talents led the Arizona Cardinals to select him with the 202nd overall pick during the sixth round of the draft. "You're getting a baller" Weaver told Cardinals brass after drafting him. This is absolutely true.

Casey Toohill, Outside Linebacker
Casey Toohill was a force for the Stanford defense for multiple seasons. He not only had his best season of his career in 2019 on the field, but off the field, he was named a finalist for the William V. Campbell Trophy. The award highlights scholar-athletes for combined academic and football success. His second-team All-Pac-12 selection helped him earn an invitation to the 2020 NFL Scouting Combine alongside his teammate Colby Parkinson. Stanford linebackers have seen plenty of success in the league and Toohill can see similar success while rushing the passer at the next level. He will need to get bigger and stronger to fill out a NFL frame and make an impact in the professional ranks. He will join former teammate JJ Arcega-Whiteside on the Philadelphia Eagles after being drafted 233rd overall in the seventh round.

Tune in to the #NFLDraft today on ABC, ESPN, and NFL Network.#EaglesDraft | #FlyEaglesFly pic.twitter.com/k1aB71DXTl

Josh Love came in as a walk-on for the Spartans and ended as one of the best players in San Jose State history. The 2019 Mountain West Offensive Player of the Year led the Spartans to the first win over a SEC opponent in school history and finished the year knocking off rival Fresno State to reclaim the Valley Trophy. Love finished third all time in SJSU history with 7,206 yards, fourth all time in completions with 578 and seventh all time in total offense with 6,924. Love didn't hear his name called during the draft, but it didn't take long for him to sign with the Los Angeles Rams to keep him in the state to backup former Cal QB Jared Goff.

Staying home! Blessed to have the opportunity to fulfill my NFL dreams playing for the Los Angeles Rams! God is good! @rams #gorams pic.twitter.com/Ai84A9206S

Cameron Scarlett, Running Back
Cameron Scarlett was the Stanford team MVP thanks to his performance in his fifth year with the Cardinal. leading the team in touchdowns, 8, Scarlett filled in the role left by Bryce Love nicely to keep the offense running for Stanford. Scarlett finished in the Cardinal top-20 all-time with more than 1,600 rushing yards for Stanford. In 50 career games, he scored 25 touchdowns, rushed for 1,676 yards and added 523 receiving yards on 41 catches. Scarlett will face his brother, Brennan, in the AFC South as he signed a deal with the Tennessee Titans.

Sailosi Latu, SJSU Defensive Tackle
If you went to a San Jose State football game, you heard Sailosi Latu's name a lot. The big man in the middle started all 12 games for the Spartans and had 54 tackles from the nose tackle position. At 6-3 334 pounds, Latu has the size to plug gaps in the NFL. He will join Jaylinn Hawkins in the ATL.