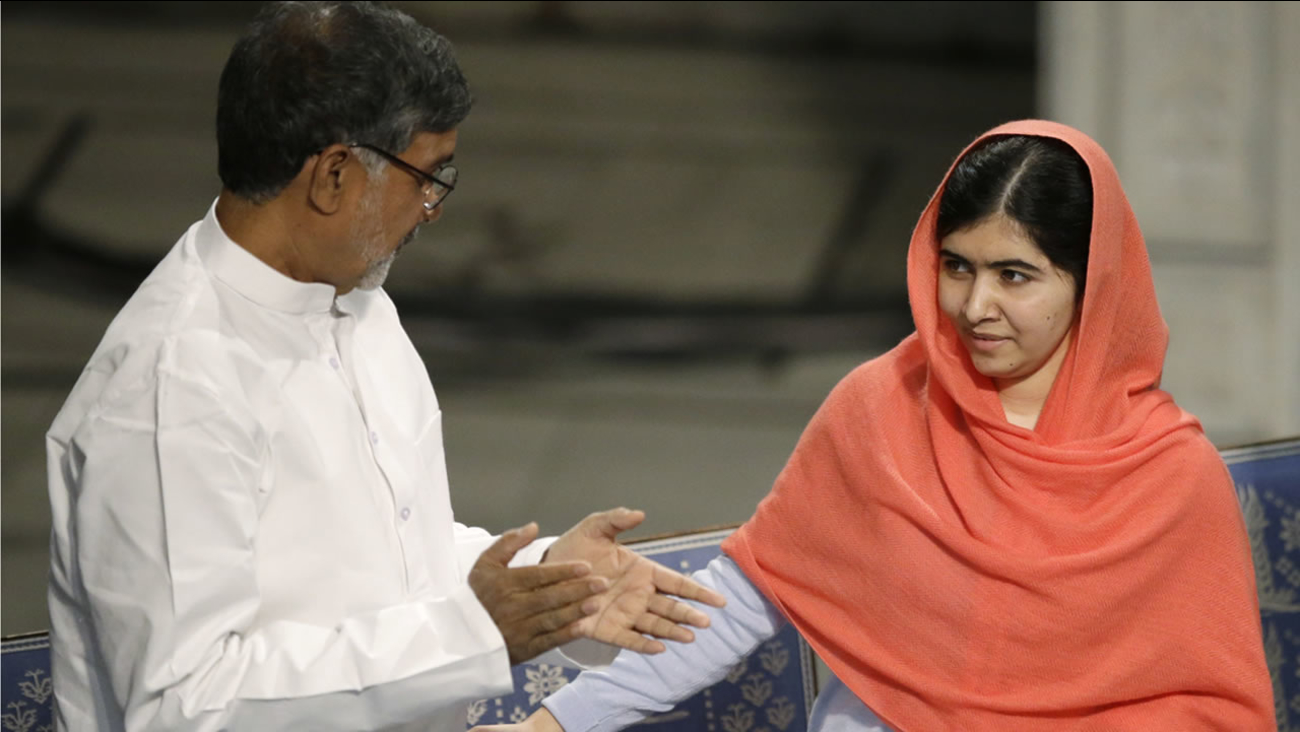 OSLO, Norway -- The Pakistani teenager stood on the stage of Oslo City Hall as the youngest Nobel Peace laureate, smiling as she listened to the thunderous ovation.

Now, everybody knows: She is Malala.

Shot in the head by the Taliban two years ago for speaking out on education, 17-year-old Malala Yousafzai on Wednesday beamed as she received the Nobel Peace Prize and taught a lesson in courage.

And with that, Malala proved that teenagers could tell the elders a thing or two. Anyone who hadn't read her memoir, "I am Malala," was about to get an education.

She adjusted her coral pink headscarf and made no effort to hide any scars that might remain from the attack. She thanked her parents for unconditional love and then humbly suggested that she was somehow not all that special - just a girl who fights with her brothers who wanted to learn above all else.

"As far as I know, I am just a committed and even stubborn person who wants to see every child getting quality education, who wants to see women having equal rights and who wants peace in every corner of the world," she said. "Education is one of the blessings of life, and one of its necessities."

Malala shared the prize with Kailash Satyarthi of India. Both have campaigned for the rights of children and young people, particularly education.

The two laureates bonded immediately. They share a hard-won understanding among those activists who have suffered much, but there is also warmth and commitment to the future. Satyarthi looked on approvingly as she spoke, and has volunteered to be her second father.

But in so many ways, it was Malala's moment. Even an asylum seeker from Mexico rushing on stage left her unperturbed.

She has used her time in the spotlight to offer hope that her prize will inspire young girls all over the world to fight for their rights - and to step forward to lead.

In an interview with The Associated Press, she played on the theme of a global sisterhood of sorts, with women gathering the strength to fight for education, the key to a future.

Malala herself often has expressed her wish to lead - setting sights on one day becoming Pakistani prime minister and following in the steps of the late Benazir Bhutto.

And it was in talking about Pakistan that she melted - if but a bit. It was as if all the excitement about the Nobels, all the interviews, all the banquets - all of it - just faded for a moment as she described her pride in being Pakistani and what the award would mean for people back home.

"There was a time this region of the world was called a terrorist place, and many people get scared of it. No one even tried to say the name of this country," she told the AP. "So I am really proud to tell people that the people of Pakistan are peaceful, they have harmony, they love each other, they believe in brotherhood.

"But there are some extremist-minded people who misuse the name of Islam and who give a bad name of our country," she said. "But that's not true. Many people are standing up for children's rights, woman's rights and for human rights."

In her hometown of Mingora, Pakistan, roughly 200 people gathered at the Khpal Kore Model High School in the Swat Valley where a large screen had been set up to show the ceremony.

"We feel honored today," said 17-year-old Naveed Ali, who was delighted to see a fellow student and hometown girl win such a big prize.

But not everyone was thrilled. Some in Pakistan feel she has become a tool of the West and question whether her shooting was staged or made up to make her a hero.

Naveed Ahsan, 25, a university student in Islamabad, said Malala was selected for the Nobel prize by those who wanted to use her to "create hate against the Taliban."

The persistence of such divisions make Malala's example that much more potent.

Sarah Cardey, a lecturer in international development at the University of Reading in Britain, said Malala stands for the indomitable courage of the human spirit.

"Her quiet example will achieve more than 1,000 drone strikes in efforts to defeat the Taliban," she said.

Malala herself left a memento behind in Oslo to show she hasn't forgotten how she got there: the bloodied school uniform she was wearing the day she was shot. It will form part of the Nobel Peace Center exhibition opening Thursday.

It's a stark reminder of how the world came to know Malala, of the time a Taliban gunman climbed into the back of a small pick-up truck used to transport Swat Valley children home from school.

"Who is Malala?" he shouted.

She attempts to answer that in her book, written with British journalist Christina Lamb. She understands she's known as the girl shot by the Taliban, the girl who survived. But she's other things too.