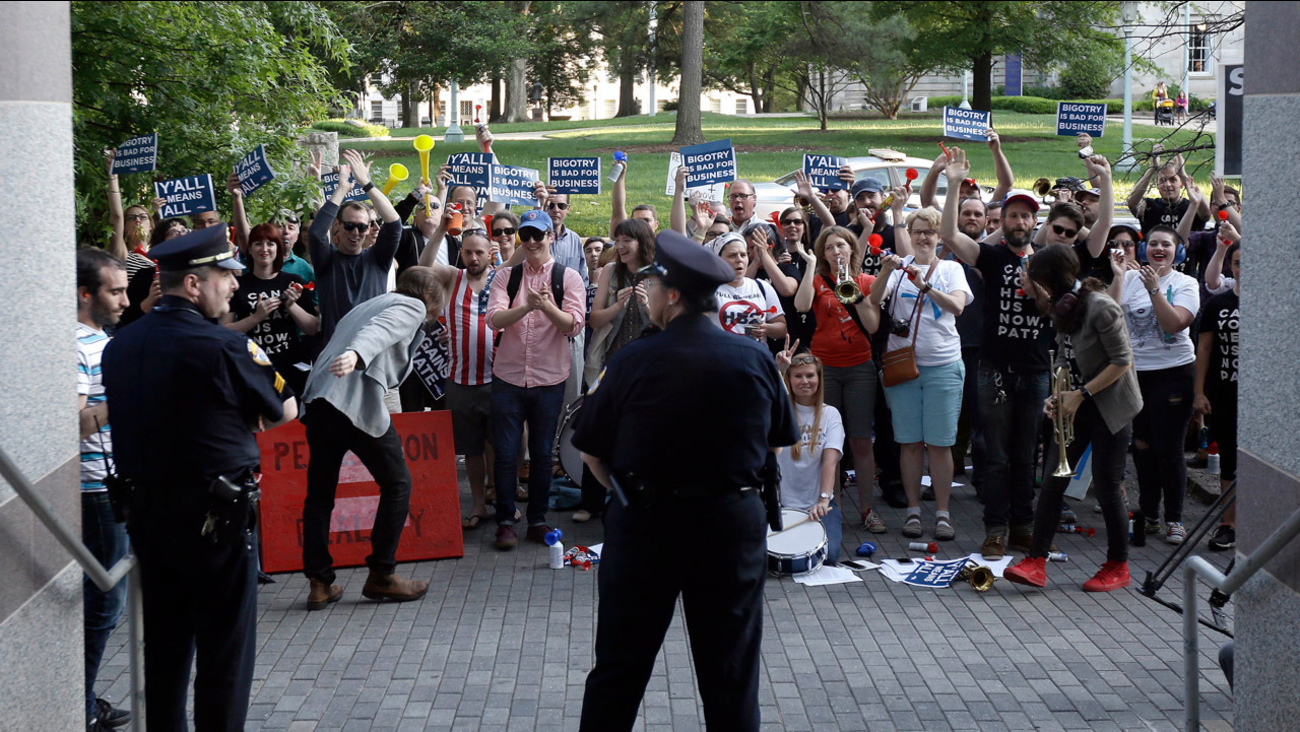 Protesters gather outside the the North Carolina Museum of History as Gov. Pat McCrory make remarks about House Bill 2 during in Raleigh, N.C., Wednesday, May 4, 2016. (AP)

NORTH CAROLINA -- Digging in Monday in his fight with the federal government, North Carolina Gov. Pat McCrory sued the U.S. Justice Department to preserve the state's new law restricting the use of public bathrooms by transgender people.

"This is not a North Carolina issue. It is now a national issue," McCrory, a Republican who is up for re-election in November, declared at a news conference.

The move sets up a potentially epic standoff with the Obama administration, with billions in federal aid at stake. U.S. Attorney General Loretta Lynch was expected later Monday to announce "law enforcement action" against North Carolina.

At issue is a fiercely disputed North Carolina law that says transgender people must use the restroom corresponding to the gender on their birth certificate. The law, which took effect in March, also excludes lesbian, gay, bisexual and transgender people from state anti-discrimination protection and bars local governments from adopting their own anti-bias measures.

Last week, the U.S. Justice Department said the law amounts to illegal sex discrimination against transgender people and gave McCrory until Monday to say he would refuse to enforce it.

McCrory instead doubled down with a lawsuit arguing that the North Carolina law is a "commonsense privacy policy" and that the Justice Department's position is "baseless and blatant overreach."

"I do not agree with their interpretation of federal law. That is why this morning I have asked a federal court to clarify what the law actually is," McCrory said. He added that Congress should ultimately clarify the reach of the nation's civil rights laws.

The North Carolina law has set off protests by gay rights groups and triggered cancellations and boycotts, with stars such as Bruce Springsteen and Pearl Jam calling off shows. PayPal abandoned a planned 400-employee operation center in Charlotte, and Deutsche Bank froze expansion plans near Raleigh.

Nearly 200 corporate leaders from across the country, including Charlotte-based Bank of America, have urged the law's repeal, arguing it is bad for business because it makes recruiting talented employees more difficult.

Several other states have proposed similar laws in recent months limiting protections for gay, bisexual and transgender people. On Monday, the American Civil Liberties Union of Mississippi sued that state over a law that will allow workers to cite their religious objections to gay marriage to deny services to people.

In their warning letters to North Carolina, federal civil rights enforcement attorneys focused on the bathroom provision. The letters were sent to McCrory, leaders of the 17-campus University of North Carolina system, and the state's public safety agency.

The Justice Department noted a ruling last month by a federal appeals court that a transgender Virginia high school student has a right to use bathrooms that correspond with his new identity. The ruling by a three-judge panel of the 4th U.S. Circuit Court of Appeals is binding on five states, including North Carolina. Virginia is seeking a re-hearing by the entire appeals court.

Defenders of the North Carolina law have argued that it necessary to protect the safety and privacy of people in bathrooms. But opponents have argued that the danger of a transgender person molesting someone in a restroom is all but imaginary.

North Carolina Attorney General Roy Cooper, a Democrat running against McCrory for governor, has refused to defend the law, which was passed in reaction to a Charlotte ordinance allowing transgender people to use the bathroom that corresponds to their gender identity.

The U.S. Education Department and other federal agencies could try to cut off money to North Carolina to force compliance.

"The government is acting as funder, not just enforcing federal laws, and they provide that money on the condition that it not be spent in a discriminatory manner," said Brad Sears, executive director of the Williams Institute, a LGBT-issues think tank based at UCLA's School of Law.

The state university system was expected to issue a separate response to the warning letter. The university's governing board scheduled a meeting for Tuesday to receive a private legal briefing from its top staff attorney.