1 critical after car crashes into building in Oakland 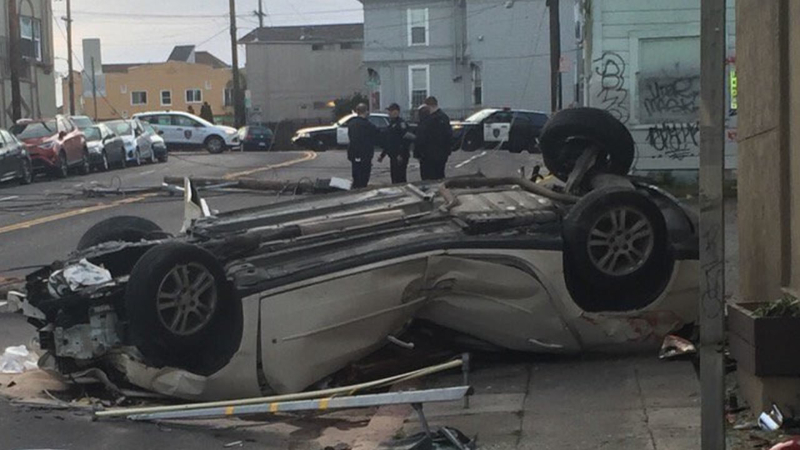 OAKLAND, Calif. (KGO) -- A car in Oakland took out two utility poles before crashing into a laundromat, landing upside down. The driver ran away, leaving behind a passenger trapped inside. That passenger is now in critical condition. As workers clean up the scene, more discoveries are being made in the front seat of the car.

When the car flipped and came to a stop on Foothill Boulevard and 23rd Avenue at 5:30 a.m., residents heard and felt it. But they didn't think the boom they heard could be from a car crash.

"I thought it was an earthquake, because it shook the buildings. We jumped up and saw everything and we tried to call 911 on the cellphones and of course they hooked up to WiFi, so we couldn't get through," said Tracy Daniels, Oakland resident.

Daniels wanted to run over and help the men inside, but two utility poles came down, she didn't know if she could safely cross the street.

"I was scared, angry, sad -- I knew someone in there and there was nothing we could do, so yeah it was sad," said Daniels.

She then saw the driver run away. He left behind his passenger - who police say was critically injured. Witnesses watched as emergency crews saved him and took him to the hospital.

"It was chaotic I couldn't believe it I saw the sparks flying car, the car was just 'boom,'" said Deborah Rodriguez, Oakland resident.

Beer in the front seat of the wrecked car in Oakland. Driver fled the scene. pic.twitter.com/AtBwz9nYOD