The day before, Ms. Yu picked up her best friend's dream wedding gown which took months of searching to find - it was "the one."
KGO
By Dion Lim 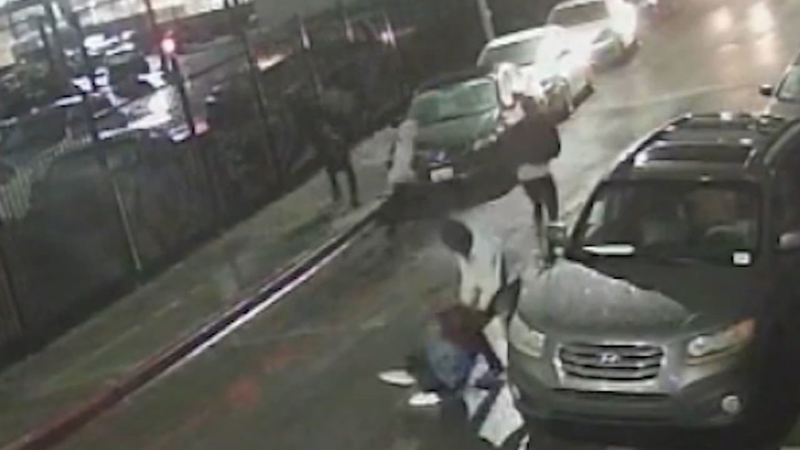 OAKLAND, Calif. (KGO) -- According to Oakland police, the stolen car was recovered and officers located the wedding dress inside of the vehicle.

Police say details of when and where the car was found will not be released at this time.

THIS IS A BREAKING NEWS UPDATE: Original story follows below.

A young woman who has volunteered for years to keep Oakland safe, has become the victim of a brazen physical attack and carjacking by multiple men. As horrendous as the crime was, the loss of her best friend's wedding dress in the trunk makes the incident all the more heartbreaking.

"I parked right here around 8:30 p.m. and I checked my surroundings..." the young woman who requested to be identified as "Ms. Yu" said, pointing to an empty parking space along the area of Foothill and 13th Avenue.

Advocating for safety and community building is practically a part of her DNA.

"I have been volunteering in Oakland's Chinatown since high school. I've been a part of the community a lot. We have been hosting a lot of events and worked with a lot of groups to improve Oakland in general. A lot of things we promote include safety," says Ms. Yu.

Oakland police are looking for a person who attacked and robbed a woman in the parking lot of a senior living facility in Oakland near Fairyland.

All of this makes what happened to her March 27 even more ironic... and terrifying.

"I usually check my surroundings before I get out of the car, check if anybody is following me," says Ms. Yu, who lives nearby. She says after she noticed nobody was around she walked around to the passenger side of the car to retrieve her purse. That's when she noticed something was wrong.

Video shows shattered glass covering the floors of the Oakland Post, the largest African American paper in NorCal, just hours after the robbery.

"I immediately closed the door and turned around and four or five guys approached me. I immediately started running."

Surveillance provided to ABC7 by a nearby business shows one suspect catching up to her.

Ms. Yu says at least one person in the group had a gun. Her purse, along with a laptop and other valuables, were still sitting on the passenger seat.

"One guy grabbed my arms. He took my keys from my hand and pushed me to the ground. I hit my head. I was really scared and didn't have time to react," Yu explained.

Within seconds, her black Honda Civic was gone.

While Ms. Yu's physical wounds, which included scrapes on her arms and legs, were not serious, her heart is broken over what was inside the trunk.

"Out of everything, the wedding dress was the one that I was sad about the most. Because it does not belong to me," she said, crestfallen.

Just one day before the carjacking, Ms. Yu picked up her best friend's dream wedding gown they had searched for months to find. Her friend had tried on dozens and dozens of dresses until finding "the one."

"It was really beautiful," says Yu with smiling eyes. "The perfect dress for her. The moment she tried it on we all said, 'That's the one!'"

Ms. Yu planned to store the mermaid-style gown at her home until her friend's fall wedding, which had already been postponed because of the pandemic.

When news of the carjacking was relayed to her friend, her friend broke down in tears, not just for her dress but for what happened to Ms. Yu.

While Ms. Yu takes some time off from work to mentally heal, she is speaking out on behalf of the community she calls home.

"Within the Asian community a lot of people are afraid of reporting and to be on the news. But it's important to tell people, that things get documented the way they're supposed to. It encourages other people too."

She is grateful for Oakland police who she says arrived on the scene within minutes and are investigating. She also thanks the community for supporting her during these difficult times.

"I feel really fortunate to be surrounded by really good neighbors and all of my friends sending love and calling me very day to make sure I'm okay."

Oakland Police tell ABC7 News the investigation is ongoing and anyone with information is asked to reach out to the Oakland Police Departments Robbery Unit at (510) 238-3326.