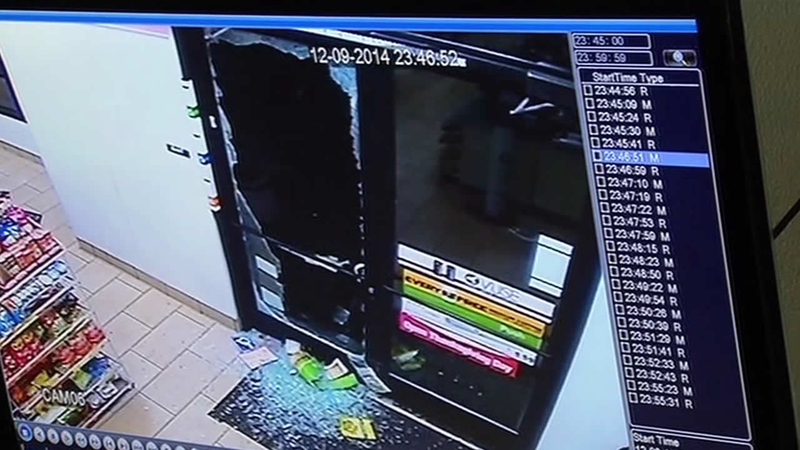 EMERYVILLE, Calif. (KGO) -- The California Highway Patrol says it would again take "whatever force necessary" to keep the freeways free of demonstrators. On Tuesday night, police confronted violent protesters who blocked Highway 24 in Oakland for more than 20 minutes, and the CHP arrested 13 people on charges of creating a public nuisance, obstructing drivers, and battery on a peace officer. After the freeway was cleared, the demonstration spilled over into Emeryville and turned violent.

Some of the demonstrators started looting businesses and vandalizing residential neighborhoods. They used chunks of concrete to smash windows.

Cement used to smash windows in Emeryville on Tuesday, Dec. 9, 2014.

At a Bank of America, even windows that were not damaged were boarded up in case the group returned on Wednesday night.

An Emeryville resident named Roger swept up broken glass on Wednesday, hoping to fix the windows of his car before the storm set in. They were smashed when what started as a peaceful demonstration turned unruly.

When asked if he has any insurance, Roger answered, "I don't have insurance right now. I'm not even working."

Protesters marched from UC Berkeley toward Oakland, blocking Highway 24. Hundreds ventured into Emeryville. Three stores were looted, including the 7-Eleven on San Pablo Avenue, which is run by Rahiel Drar and her father.

"Me and my dad both came down here and we've just been cleaning up glass," she said. "We cleaned up glass all night so we could open up this morning."

In surveillance footage, you can see employees had locked the doors when looters used garbage cans and pieces of concrete to force their way inside. She says they stole $2,000 worth of merchandise that included cigarettes and alcohol.

7-Eleven vandalized and looted in Emeryville on Tuesday, Dec. 9, 2014.

"The loss is coming from our paycheck," Drar said. "You know, the store is our livelihood."

The Pak "N" Save was also looted while a few customers were still inside. On Wednesday, several windows were boarded up. You could still see scuff marks from concrete on the glass. Some people who live and work in the East Bay are fed up.

"Destroying stores in our community where we have to live and where we grew up, that's our money that's going to have to fix that," said one resident.

"The citizens here are paying for something that didn't happen in Emeryville," said Emeryville police Officer Brian Head. "It occurred 2,000 miles away. And for some reason, everybody here is hearing the brunt of it."

Police are stretched thin. There are only about 34 officers in Emeryville.

On Tuesday night they made no arrests. But they are looking at video to try and catch the people who vandalized their town.