Demonstrations in Oakland 'differentiating themselves,' police chief says as some protest peacefully, others cause harm

"What happens after dark, frankly, is another matter," she said.
KGO
By Kayla Galloway 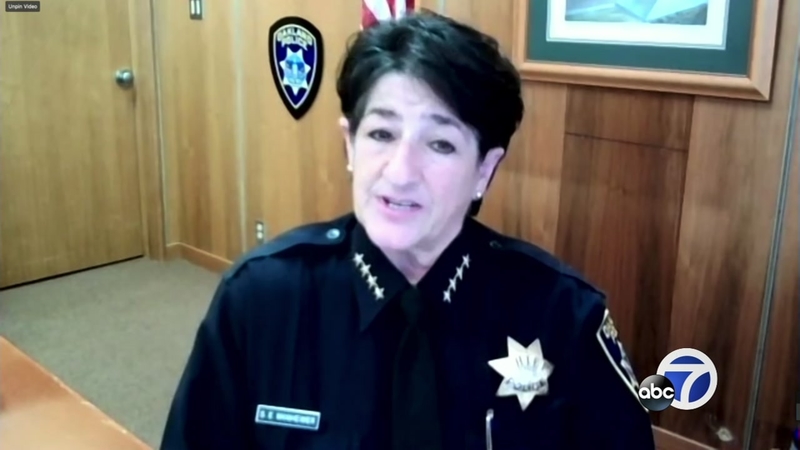 OAKLAND, Calif. (KGO) -- As the U.S. grapples with police brutality and civil unrest, Oakland's interim police chief says say "this is one of the more transformational moments" in her 37 years of policing.

Chief Susan Manheimer joined ABC7 Thursday to discuss the demonstrations seen in Oakland in recent months in light of the death of George Floyd and the police shooting of Jacob Blake.

She said there is a clear difference between the peaceful demonstrators in Oakland and those with an intent to harm.

"What we're seeing now is the demonstrations are differentiating themselves," she said.

Manheimer said demonstrators with intent to cause harm in Oakland are policed differently than the other demonstrators, whose demonstrations don't need to be facilitated, she said.

"What happens after dark, frankly, is another matter," Manheimer said.

Protests are underway in Oakland over the police shooting of Jacob Blake in Wisconsin. Police say some people are breaking windows and starting fires.

Amid protests in Oakland, the Federal Building, downtown areas and other civic buildings were damaged.

Just last week, police officers had rocks and bottles thrown at them during demonstrations, the chief said.

Rocks are being thrown at officers. Crowd is using shields to assult officers. OPD is advising crowd their criminal activity will not be tolerated and those violating the law will be arrested. pic.twitter.com/DrEIKwbGzD

Manheimer said that is "very troubling" to her.

Last week, the police department said on Twitter that the crowds were "violent, destructive and displayed hostility."

During Thursday's interview, the police chief also discussed a rise in crime in Oakland during the second quarter of the year.

Between March and June, Oakland saw 23 homicides, up from 11 during the first three months of the year.

Assault cases with firearms also drastically increased with 114 in the second quarter, compared to 69 in the first three months of the year.

Manheimer said, "we are just really troubled by this."

The rise in crime during the COVID-19 pandemic comes on the heels of a five-year decrease in Oakland.

The upward trend seen this year is something being seen in other major cities across the U.S., the police chief said.

Watch the full interview with Oakland's police chief above.