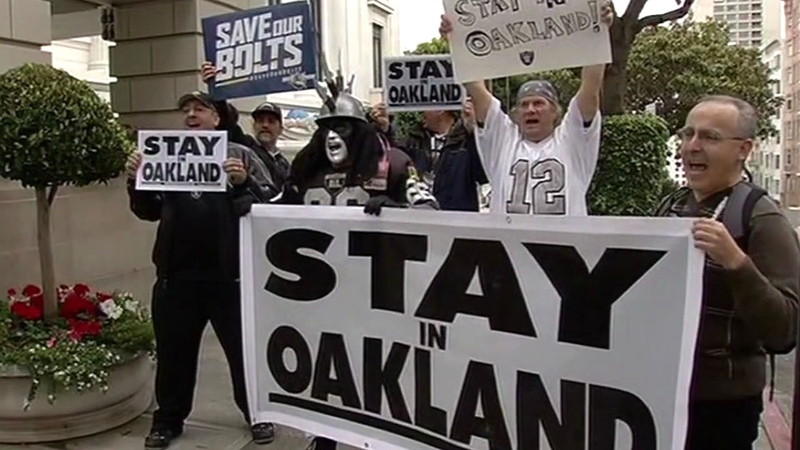 SAN FRANCISCO (KGO) -- The NFL team owners gathered for their spring meeting in San Francisco and one of the primary topics of conversation was the future home of the Oakland Raiders. The two days of meetings are taking place at the Ritz Carlton.

A small band of Raiders fans, including the die-hard "Dr. Death" gathered outside the NFL owners' meeting. They want to keep the silver and black from leaving Oakland.

"The last three years that we've been selling out your stadium, put something forward, put forth a plan," said Ray Perez, Raiders fan "Dr. Death".

They hoped to attract the attention of team owner Mark Davis and they did.

A fan said: "Mark, just know that we support you here in Oakland."

Raiders' fans at NFL owners' meeting. The are protesting efforts to move the Silver&Black out of Oakland to SoCal. pic.twitter.com/zkU9JHFoLn

The Raiders are deciding whether to move from the aging O.co Coliseum and build a nearly $1.7 billion stadium they would share with the San Diego Chargers in the city of Carson, near Los Angeles. In fact, a complicated land deal between the teams and Carson officials was finalized on Tuesday.

Former 49ers president Carmen Policy is the point person on those negotiations. He said, "I know the way it works in the room. I know what they're looking for, what has to be done."

But owner Davis says there's still a glimmer of hope for Oakland. He said, "I want to keep the Raiders in Oakland, if I can, I really do. But we have to be able to complete."

The city of Oakland and Alameda County are working together for the first time and that could make the difference.

There's a several hundred million-dollar gap between what the Raiders want, what they really desire, and what the city and county can come up with at this point.