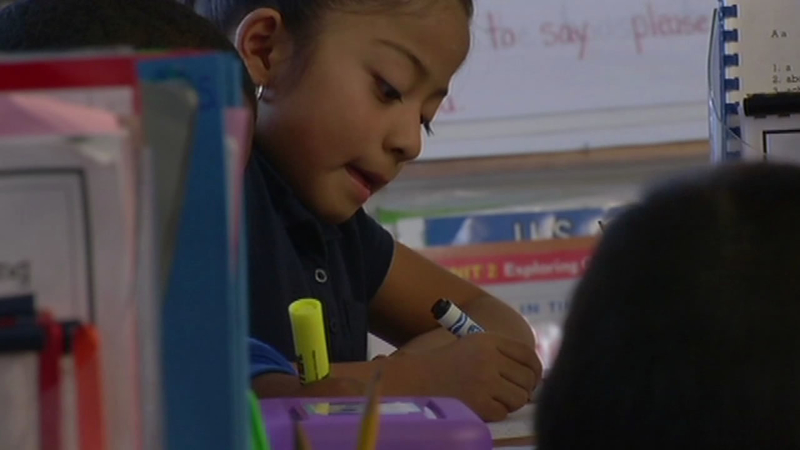 OAKLAND, Calif. (KGO) -- Teachers in Oakland will be paid extra if the number of students in their classroom exceeds the mandatory class size. That's one of the items negotiated with the teachers' union.

Under the new proposal, once school starts next August, the district will have 10 days to make sure that all the elementary school classes have the right number of students. High schools will have 15 days. If they are over, some teachers will have a bigger pay check

A kindergarten teacher in Oakland can only have a maximum of 27 students. Once in a while, the school is forced to add a student or two, which goes against the mandatory class size requirement.

At the request of the union, the district has agreed to pay teachers more when this happens.

"It would be on a per pupil basis for every student over the cap that we would agree upon there will be a certain dollar amount that the teacher will receive as compensation," Oakland Unified School District spokesperson Troy Flint said.

The same would apply at any grade level especially high school if the student/teacher ratio is not followed.

"Automatically with each child you will have so much more work if you are doing your job properly so you should be compensated accordingly," said Oakland parent Larisa Martiniak.

But others worry how this may affect the level of instruction.

But the reality is that the district has been dealing with this problem for some time. In the past, the union has had to file multiple grievances.

The teachers' union says this proposed compensation is really a penalty to force schools to comply.

"If they are over, we want the monetary penalty to be large enough so that they get under the class maximum as quickly as possibly," said Trish Gorham of the Oakland Education Association.