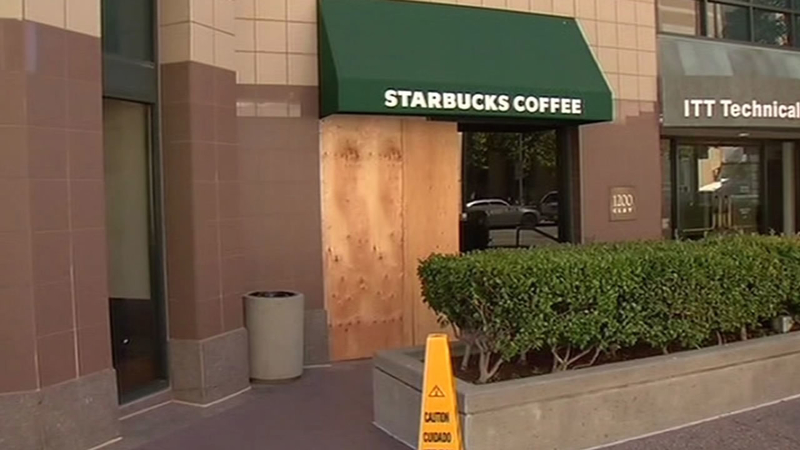 OAKLAND, Calif. (KGO) -- There are many questions that remain about a police shooting that left a 24-year-old man dead in West Oakland on Wednesday. A protest against the deadly use of force Wednesday night shut down a freeway and damaged some businesses, so the mayor of Oakland is speaking out.

The armed robbery suspect's name has not yet been released. Oakland police say the use of deadly force was justified. However, many protesters disagree and they say they'll be back Friday evening to protest again.

"It is frightening, because it happened to them only, but it could have happened to any of us," Almonte said.

Activist Cat Brooks, with the Anti-Police Terror Project, was on the streets Wednesday night and she says the crowd was upset and demanding answers. She told ABC7 News, "We continue to have this question about why lethal force is the only option that OPD can use."

On Wednesday, Oakland police chased the armed robbery suspect from 69th Avenue and International Boulevard all the way to the intersection of 27th Street and MLK Jr. Way, seven miles away. Police say the driver crashed into a car, jumped out and ran while carrying a loaded handgun. He tried to carjack another car then ran off before three officers opened fire on him.

"We fully expect to have the right to walk the streets and protest this latest murder," Brooks said.

"We urge people to look at the actual facts," Schaaf said.

Schaaf told us by phone, she respects the right to protest, but vandalism won't be tolerated. She said, "We are absolutely committed to ensuring that there is not the type of destruction that has happened the past in Oakland."

Oakland police released partial autopsy results of the suspect, releasing a key piece of information. Lt. Chris Bolton tweeted: "... bullet wounds were to front of unidentified man's body, indicating he was not shot in the back as some witnesses had claimed."

Donelan said, "This gentleman was on a rampage. He robbed citizens, tried to carjack people, he's running around armed on a major thoroughfare in Oakland. What are we supposed to do here?"

An attorney for the Officers Association told the San Francisco Chronicle video from body cameras worn by the officers shows the man pointing a gun at them.

Regardless, the protesters who marched through Oakland Wednesday night say even if the suspect had a gun, officers did not have to use lethal force.

"There are questions about whether that was the only option OPD has and why the disparity? When white folks shoot at cops, they get taken in alive, when black folks simply have a gun or there's a gun on the seat, they end up dead," Brooks said.